Happy Dairy Month All Year ‘Round

Happy Dairy Month All Year ‘Round

A self-described city slicker from the St. Croix Valley by way of southern Minnesota knows enough about dairies and dairy cows to be considered dangerous. Most of that danger is self-imposed. To this day, the city slicker walks gingerly though the dairy barn at county and state fairs, avoiding raised tails, hind legs, and even eye contact.

“Slick’s” enjoyment of dairy products has never wavered. Daily intake of milk is a given. Cheese is enjoyed atop burgers, crackers, or sliced between pieces of bread in a grilling pan. Ice cream is a weakness. Enough said.

The media blitz of stats and figures behind June’s designation as Dairy Month has been successful. Some of them sunk in. While the dairy industry could be considered a big business, the Wisconsin Department of Agriculture, Trade and Consumer Protection (DATCP) proclaimed 96 percent of Wisconsin dairy farms as being family-owned. Wisconsin is also home to more dairy farms than any state in the country, according to DATCP.

Along with 88,000 residents, St. Croix County hosts another 18,400 dairy cows. Clark, just a couple counties away, boasts around 68,000 milk cows and Marathon has 61,000. In the case of Clark, there are nearly two milk cows for every resident. Even rapidly-growing Dane County, with its own gravitational field around Madison, has 55,000 milk cows.

There’s an estimated 1.28 million dairy cows in Wisconsin, producing 30.1 billion (with a ‘b’) pounds of milk. Milk production per cow is estimated at 23,550 pounds or 2,739 gallons. For cows to produce at those levels, they have to be content and well cared for. Wisconsin’s milk production is second nationally to the groovin’ cows of California. Wisconsin trumps all states in cheese, making just over 26 percent of what’s produced in the U.S.

Dairy farms continue to decline. The sharpest decline in dairy farms in St. Croix occurred in the 1980s, which coincided with tough economic times all over. Today, there may be 160 dairies, and that estimate continues to shrink. The American Ag Alliance wrote that producing a gallon of milk today uses 90 percent less land and 65 percent less water, along with a 63 percent smaller carbon footprint than in 1944.

The recognition of a single month as Dairy Month is a misperception. Dairies are 24/7 and 365. If urban folks like the city slicker from the St. Croix Valley wish to enjoy those dairy delights, then the milking parlors, cheese plants, and ice cream makers may wish to up their games in the future.

On June 20th, the Wisconsin Department of Workforce Development (DWD) announced the preliminary May 2018 unemployment rates for Wisconsin’s 72 counties and the 32 cities with populations greater than 25,000 residents. St. Croix County’s rate was estimated at 2.4%. For comparison, St. Croix’s final rate for April was 2.8% and March’s final rate was 3.3%. One year ago, the county’s unemployment rate was estimated at 2.8%.

DWD said preliminary unemployment rates for May declined or stayed the same in 70 of the 72 counties when compared to May 2017. Fifty (50) of the state’s 72 counties experienced or tied their lowest May unemployment rate on record in 2018. The rates ranged from 1.8% in Lafayette County to 6.1% in Menominee.

St. Croix, Pierce, Polk, and Dunn counties comprise Wisconsin’s Greater St. Croix Valley. In addition to St. Croix referenced above, May’s preliminary rate in Dunn was estimated at 2.5%, Pierce at 2.6%, and 2.7% for Polk. The current rates are lower than the rates for May 2017. 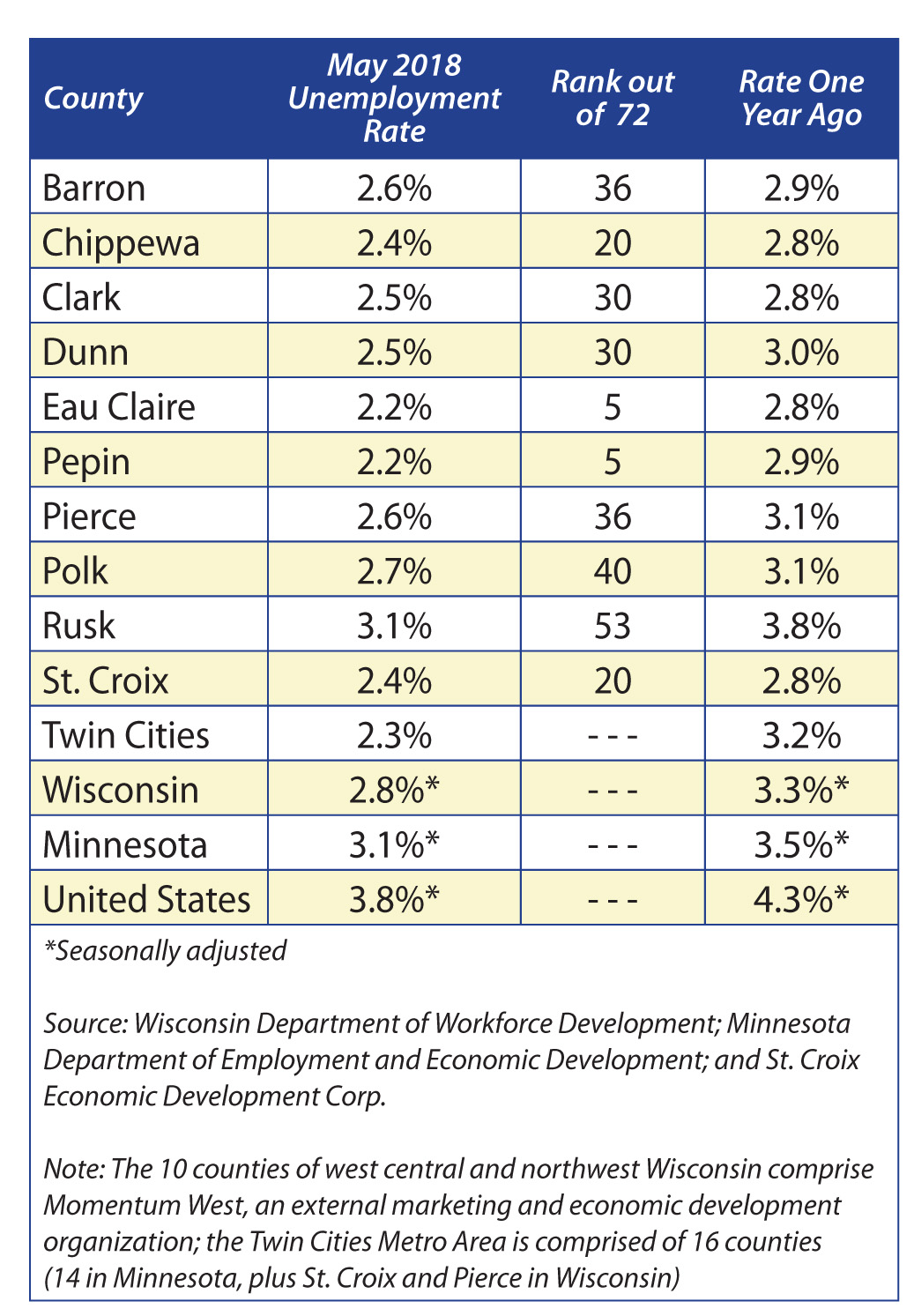 ← Traveler Spending Adds Up Happy Dairy Month All Year ‘Round →

In May, the Wisconsin Department of Tourism released its annual estimate of traveler (tourist) spending for 2017. Spending is up locally, across the region, and for the state, providing evidence of worthwhile local attractions and healthy disposable incomes from which transactions are derived.

According to Tourism, 2017’s traveler spending in St. Croix County increased 4.11 percent to $110.6 million. From art fairs to bacon bashes and everything in between, curious travelers are willing to attend local events and spend some money before they depart for home or other destinations.

St. Croix is not known as a huge tourist hot spot. The $110 million spent in St. Croix is a far cry from the nearly $1.1 billion generated in Sauk County, home of the Dells, waterslides, and excursion boats shaped like ducks. St. Croix has its peppers (North Hudson), chili (Baldwin), and good neighbors (Roberts), etc. The 4.11 percent gain in St. Croix still tops Sauk’s 3.67 percent increase but not Chippewa County’s 10.55 percent increase. Indeed, the Leinenkugel brewery is a major draw.

Tourism spending is a multi-billion dollar industry in Wisconsin. Travelers generated an estimated $12.7 billion across the state in 2017, resulting in a respectable 3.17 percent increase from 2016. Another $19.9 billion in total business sales are attributable to tourism and travelers.

Tourism spending also creates job, even though many are seasonal and most could be described as low-paying. Tourism’s report revealed nearly 2,000 jobs in St. Croix are supported by traveler spending, an increase from 2016. Across the state, around 194,000 jobs are linked to travelers.

Tourist spending pays its share of taxes, reducing the burden to homeowners, businesses, and retirees. An estimated $13.9 million in state and local tax revenue in St. Croix County was attributable to travelers last year. Put all 72 counties together and almost $1.54 billion in local and state taxes was reaped. Cha-Ching.

Whether it’s a snow cone vender or pottery booth, if the person in line does not look familiar, there’s a good chance he or she came from out of town to enjoy a local festival.