Why All The Drama?

Here’s one for those of you thinking of relocating your business. It’s not as daunting as you may think, and may be more beneficial in the long run. Contact St. Croix EDC for more info.

← June 2018 Unemployment Early Signs of Autumn in the Valley →

On July 25th, the Wisconsin Department of Workforce Development (DWD) announced the preliminary June 2018 unemployment rates for Wisconsin’s 72 counties and the 32 cities with populations greater than 25,000 residents. St. Croix County’s rate was estimated at 3.2%. For comparison, St. Croix’s final rate for May was 2.4% and April’s final rate was 2.8%. One year ago, the county’s unemployment rate was estimated at 3.2%.

DWD said preliminary unemployment rates for June declined or stayed the same in 70 of the 72 counties when compared to June 2017. Forty counties experienced or tied their lowest June rate on record. The rates ranged from 2.5% in Lafayette County to 6.3% in Menominee.

The June 2018 preliminary unemployment rates decreased or stayed the same in 28 of Wisconsin’s 32 municipalities with population bases of least 25,000 residents when compared to July 2017. Seventeen (17) of the 32 largest municipalities experienced their lowest June unemployment rate on record. Rates ranged from 2.7% in Fitchburg and Sun Prairie to 5.0% in Racine and Beloit.

St. Croix, Pierce, Polk, and Dunn counties comprise Wisconsin’s Greater St. Croix Valley. In addition to St. Croix referenced above, June’s preliminary rate in Polk was estimated at 3.3% and both Dunn and Pierce were estimated at 3.5%. The current rates are lower in three of the four counties compared to the rates for June 2017. The rate for St. Croix is the same as one year ago.

The preliminary (seasonally adjusted) unemployment rate for WI in June was estimated at 2.9%, which is higher than the final rate of 2.8% for May and April. One year ago, the state’s seasonally adjusted rate was 3.3%. 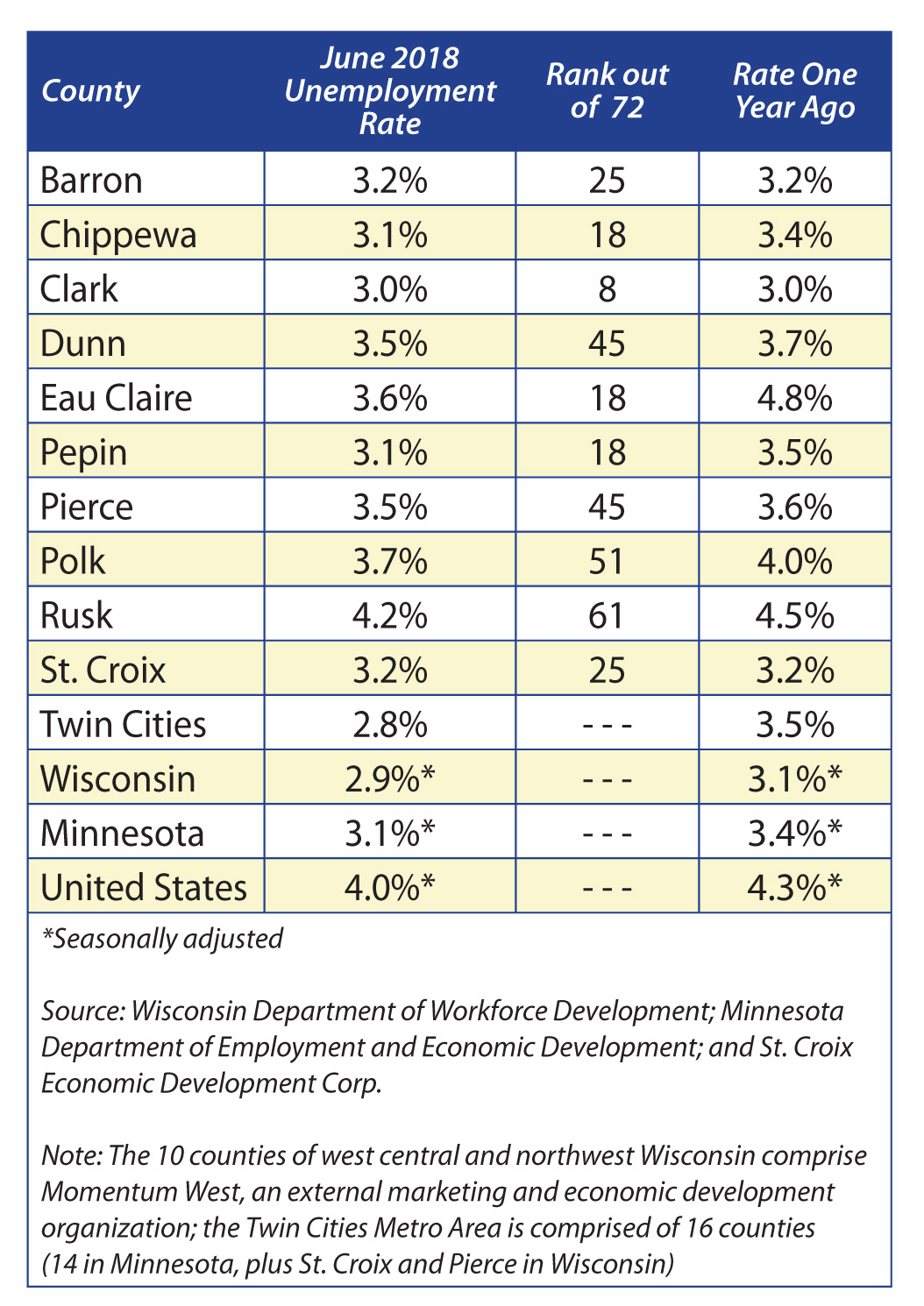 St. Croix EDC is pleased to debut the first in a series of short videos informing our audience of the various services we offer to new and expanding businesses in St. Croix County, Wisconsin. Enjoy, and please share with your network.

If you need more space for your business but don’t know where to turn, give us a call. We can point you in the right direction. (715) 381-4383 or bill@stcroixedc.com.

← Worth the Wait: River Crossing Turns One June 2018 Unemployment →

Worth the Wait: River Crossing Turns One

Worth the Wait: River Crossing Turns One

To fanfare, the St. Croix River Crossing opened on August 2, 2017. History teaches us that good things come to those who wait. The St. Croix Valley waited decades for its moment last August. The opening event was widely covered by national news and Twin Cities media.

At the ceremonial ribbon-cutting held on the morning of August 2nd, Minnesota Governor Mark Dayton spilled the beans by saying the new bridge would open later in the day. Into the microphone Gov. Dayton asked his transportation commissioner, “Charlie (Zelle), is it still 8:00 p.m.?” The program’s emcee, Oak Park Heights Mayor Mary McComber, was quick with a reply, “The Governor has ruled it will be 8:00 p.m. tonight!” Cheers rang out. Until that moment, MnDOT had played it close to the vest about the exact day and time the new St. Croix River Crossing would open. Perhaps it was the worst kept secret in engineering circles.

If one bridge was set to open, then another would close. August 2nd marked the closing of the historic Lift Bridge in downtown Stillwater, MN. The last car across the Lift Bridge was a vintage 1931 Stutz convertible, the same year the Lift Bridge opened. The starter on the Stutz reportedly failed as it made its way across the bridge and even Stillwater’s Mayor helped push it along. At least it did not run out of gas as it appeared the Lift Bridge would. Old and tired, the erector-set-of-a-bridge was just about done. It served the St. Croix Valley well.

Fittingly, the Lift Bridge gets a second chance as a recreational amenity for the St. Croix Valley. The bridge is in the middle of a restoration. It is expected to reopen in mid-2019 for pedestrians and bicyclists to enjoy as they cross between Wisconsin and Minnesota on a loop trail connecting it to the new bridge.

Both Governor Dayton and Wisconsin Governor Walker were in rare form during the ceremonial opening. Gov. Dayton vowed to place a tollbooth on the new bridge and Green Bay Packer fans would pay double. Gov. Walker responded with a reminder of 2018’s Super Bowl game in Minneapolis and how convenient it would be for Packer fans to attend and cheer on their team. Alas, neither the toll booth nor Green Bay playing in the Super Bowl panned out.

Whether it’s a birthday or anniversary, the St. Croix Crossing will have served the St. Croix Valley for one year as of August 2nd. Well played.

← They Build Things and They Tear Them Down, Too Office Space Too Small →

They Build Things and They Tear Them Down, Too

They Build Things and They Tear Them Down, too

Excavators are salt of the Earth-type people. Before things can be built starting at eye level and above, excavators are called in for site grading or to install water and sewer pipes beneath the ground. Sometimes demolition is needed. Dangerous but rewarding work, indeed. Big kids in a sandbox.

Demolition progress at the former St. Croix Meadows Greyhound Racing Park in Hudson, Wisconsin has been tracked since April. Just like eating an elephant one bite at a time, there is no easy way to grind up acres of asphalt parking or demolish a multi-level grandstand, both of which faced years of neglect, going back to its closure in 2001.

The grandstands have mostly come down, and observers will find piles of material, sorted by useful value – – metal here, steel there, and concrete over there. Reportedly, there is an hour of cell phone video involving a tug-of-war between the last of the upright, twisted steel beams and big-time excavation equipment. Back-and-forth, the upright beams refused to come down, followed by more equipment and another round of tug-of-war. Physics may have favored the stubborn beams. One hour later, the excavators broke for lunch. Perhaps it was halftime.

Fast forward to July 3rd and the state’s top guy from Madison arrived at the old greyhound track for an announcement. The beams were still upright. As a backdrop to the sound system, a huge America flag was flying, secured between earthmoving equipment. The excavating crew took their spot between the flag and the speakers. Fittingly, several photos captured them in their orange vests and blue jeans. Following his announcement, the top guy shook their hands and mingled, perhaps his way of acknowledging their important contributions to the project.

The remaining beams have come down. Years from now the demolition crew may remember the effort it took to overcome both physics and structural integrity. In its place, the development group envisions corporate sites, hospitality, office, commercial, hospitality, and a right-sized stadium that will be home to a Northwoods baseball team in a year or two. It would be ironic if some of the recycled beams made its way back to the site. Maybe but maybe not.

Here’s to the gritty part of progress. Here’s to the excavators. They build things and they tear them down, too.

← Happy Dairy Month All Year ‘Round Worth the Wait: River Crossing Turns One →