Before there was a Jordan, Kobe, Curry, or LeBron basketball shoe, there was the Converse Chuck Taylor All Star model. Make that the iconic Converse Chuck Taylor All Star shoe. Make that the nearly 100-year old All Star shoe. Yes, the same shoes worn by the mythical 1951-52 Hickory Huskers in the movie, Hoosiers. And Michael J. Fox in Back to the Future. And the cast of Happy Days. And now, worn by hipsters and fashion wannabes, young and old, who seek a retro-style.

Today, there are many, many options with basketball shoes. As for the Chuck Taylor All Star, the options may have been white or black, and ankle cut or hightop. A company called Converse starting making basketball shoes in 1917, and in 1921, a semi-pro basketball player named Charles “Chuck” Taylor, joined the company in sales. Converse relied on Taylor’s suggestions for a better design. The circular “All Star” logo was added to protect the ankle, followed by Taylor’s signature, giving the shoes an endorsement of sorts, likely among the first of its kind in athletics. Taylor was soon conducting basketball clinics at YMCAs across the country and promoting the Converse All Stars. Sales soared.

In reality, there was nothing particularly special about the All Star shoe. They were made of cotton canvas, with a distinctive toe cap and brown, non-skid rubber sole. The shoe’s so-called “loose lining” of softer canvas was said to offer greater flexibility and prevent dreaded blisters. City players, country bumpkins, professionals, U.S. military, and Olympic athletes all wore the All Stars.

Several hundred million pairs have been worn since the 1920s. But by the 70s, the shoe lost its popularity. Canvas was passed by with leather and along came an upstart company known by its swoosh. Converse filed for bankruptcy and was acquired by that swoosh company in 2003. The All Star brand got new life. Various models like the Chuck II have been introduced and marketed. Some were commercial failures, but others offer the causal look in numerous colors and prints.

The semi-pro player turned salesman is long gone but his name on a pair of shoes lives on. Spectators would be hard-pressed to see basketball players wearing the All Star model on the court. However, their popularity can be found on patrons in coffee shops, bass guitarists in grunge bands, and artists.

Long live the Chuck Taylor All Star shoe, whether it’s a hightop or ankle cut, or in bright pink or silver.

On November 21st, the Wisconsin Department of Workforce Development (DWD) announced the preliminary October 2018 unemployment rates for Wisconsin’s 72 counties and the 32 cities with populations greater than 25,000 residents. St. Croix County’s rate was estimated at 2.4%. For comparison, St. Croix’s final rate for September was also 2.4% and August’s final rate was 2.9%. One year ago, the county’s unemployment rate was estimated at 2.5%.

St. Croix, Pierce, Polk, and Dunn counties comprise Wisconsin’s Greater St. Croix Valley. In addition to St. Croix referenced above, October’s preliminary rate in Dunn was estimated at 2.3%, followed by Pierce at 2.6% and Polk at 2.7%.

For the ninth consecutive month, the preliminary (seasonally adjusted) unemployment rate for Wisconsin was at or below 3.0%. For October, the rate was estimated at 3.0%. One year ago, the state’s seasonally adjusted rate was 3.2%.

The preliminary (seasonally adjusted) unemployment rate in Minnesota in October was estimated at 2.8%, which is the same as September’s final rate and lower than August’s final rate of 2.9%. Minnesota’s seasonally-adjusted rate one year ago was 3.3%.

October’s estimates are preliminary and are subject to revision within the next few weeks. 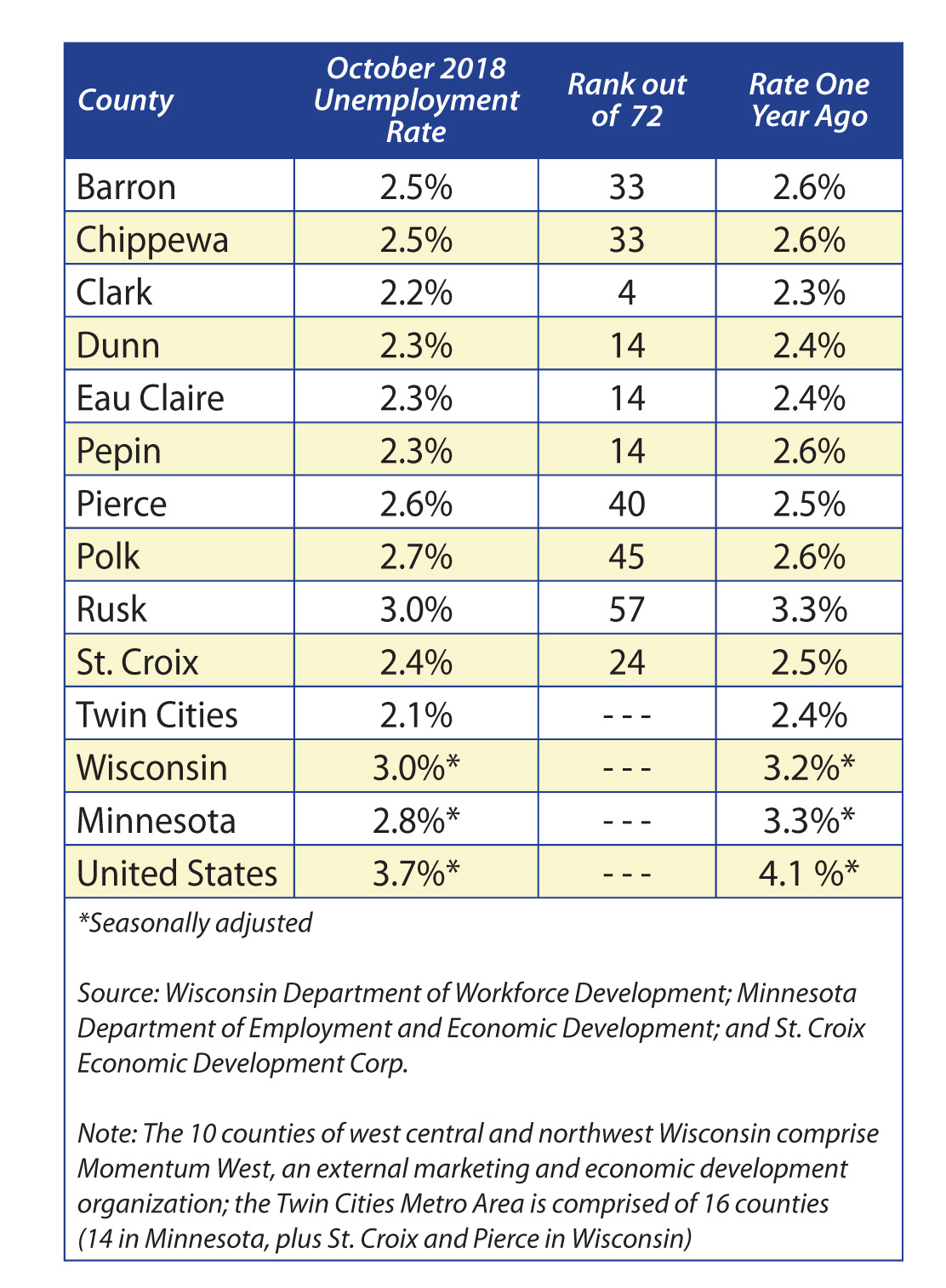 ← In the Giving Season, Give Cheese October 2018 Unemployment →

In the Giving Season, Give Cheese

In the Giving Season, Give Cheese

Only true Green Bay Packer fans are able to recite the origin of the foam hat designed to resemble a mighty wedge of cheese. All others must rely on Google and Wiki, neither of which are stellar fortresses of accuracy.

According to lore and corroborating websites, Chicago Bear fans began taunting Packer fans with the Cheesehead term after the Bears won the Super Bowl in 1986. Packer and Brewer fans embraced the nickname, and sometime in 1987, a chap named Ralph Bruno created the first wedge of foam cheese while cutting up his mother’s couch, perhaps otherwise destined for a landfill. Or porch. Or alley. Necessity is once again the mother of invention. Bruno later started a business to sell the Cheeseheads as novelty sporting apparel. Foamation, Inc. of St. Francis, Wisconsin owns the Cheesehead trademark and manufactures dozens of other cheese-related foam products, including bowtie, baseball hat, championship belt, dagger, and (Lombardi-like) trophy.

Fast forward to November 4th. Jamie Kiesl, while sporting a Cheesehead at a Milwaukee Bucks basketball game, was able to name 27 different cheeses in 30-seconds as part of a fan contest. She also demonstrated multi-tasking skills by holding a young daughter on her hip during the contest. A Bucks player, Sterling Brown, only named 17 cheeses in the pre-recorded segment for the contest. When asked about knowing so many types of cheese, Kiesl was said to have replied, “I’ve lived in Wisconsin my whole life.” The Journal Sentinel summed it up best by noting, “There is nothing more Wisconsin than this.”

And now, holiday shopping approaches, complete with lists for the naughty and nice. Why not make it a little more Wisconsin this season? In the giving season, give some Wisconsin cheese. Artisan cheese shops large and small are equipped with on-line ordering capabilities. These shops offer a wide selection, including obscure and exotic, all reflected in the price. Without playing favorites, a jolly old elf may call out, “On Bass Lake Cheese Factory, On Cady Cheese Factory, On Ellsworth Cooperative Creamery (Cheese Curd Capital of Wisconsin) and On UW-River Falls Falcon Foods (note: the student-run cheese plant reopens in 2019 following extensive renovations). . . .” When in doubt about cheese shops and respective locations, try an elf named Google.

This season, give cheese. There is nothing more Wisconsin.

← Sign of the Times: Help Wanted In the Giving Season, Give Cheese →