St. Croix Valley residents will be relieved to put a wintery February in their rear view mirrors and may be thrilled to say, “Bring on March.”

More than one hermit living alone in the woods suffered from cabin fever – a term for listlessness and general irritability stemming from long periods of indoor confinement. The snowy weather of February will certainly yield to better days in March, moving the St. Croix Valley closer to a cure for cabin fever, right? Big Oops. March is still regarded as the snowiest month in the Midwest. Keep those shovels handy. Snowplow operators are deserving of an occasional Thumbs Up – with or without mittens. Confined in a cab and dealing with White Gold can bring on its own form of Madness.

And then there are year-end tournaments to determine champions in a variety of sports for girls, boys, women, and men. Notre Dame’s women basketball team is the defending national champs. Much of the credit goes to Arike Ogunbowale who came to ND by way of Divine Savior Holy Angels High School in Milwaukee. In a 48-hour span, she hit back-to-back game-winning baskets to knock off number one ranked UConn and then Mississippi State in the finale. Both shots are worthy of a Google search. In short, the Madness of March stuck again (and again). Arike didn’t need ND’s shamrocks on her jersey for good luck. She put forth the one-two combo of hard work and skill in making those game winners. UConn and Mississippi State may claim otherwise, alleging ND’s trademarked shamrocks as the culprit.

The Madness also appears on March 17th. St. Patrick’s Day makes everyone Irish for a day, whether it’s the bona fide O’Keefe clan or McRubin wannabees. Our friends in New Richmond, Wisconsin put on a pretty good show for the day, thanks to the enclave of early Irish settlers. 2012 will be remembered in New Richmond as the Wearing o’ the Flip-Flops as revelers enjoyed the almost 80-degree day. Other years are better-suited for after-dinner coffee drinks and long underwear. The Madness strikes again.

Income tax filings are well underway and many have appointments in March. A refund from Madison or the U.S. Treasury, or both, is an unexpected surprise. Holiday bills, Florida getaways, or Colorado skiing trips can be paid off. For others, filings mean The Tax Man Cometh and he or she may want more money. For those filers, it can only be attributable to the Madness and the pain is extended all the way up to the April 15th deadline.

March can be packed with odd occurrences. Madness or not, the St. Croix Valley’s hearty citizens will survive. Spring is near.

We are creeping up on the anniversary involving a triumph of Goliath proportions. On February 22, 1980, the U.S. men’s Olympic hockey team defeated the Soviet team in Lake Placid, N.Y. An upset does not begin to describe the outcome. Hard to believe it’s been 39 years.

With broad brush strokes, a 1980s picture in the U.S. and globally could be painted this way: inflation was rampant, unemployment was high and climbing, an energy crisis had a strangle hold on businesses and consumers, the dial for the Cold War was turned to ‘bitter’ and, the Soviets were in Afghanistan on military business.

A fast-talking economic development guy was residing in central Minnesota at the time. He claims to have learned of the hockey victory by way of a car radio tuned to A.M. while on Broadway Avenue. February 22nd was a Friday and a saloon may have been calling. Spontaneity ensued, including shouts of joy from a rolled-down car window and a horn that wouldn’t stop honking.

For the younger generation, cell phones, laptops, tablets, Internet, Facebook, Instagram, and Twitter did not exist in 1980. Repeat, did not exist. Why is this important? The game was not broadcast live in the U.S. and options to follow it were very limited. It started at 5:00 p.m. Eastern Time (1:00 a.m. Moscow time), and later, was brought into homes across America as part of the network’s prime time coverage. When the game did air, the hosts explained it had been contested but promised not to leak the outcome. The capacity of the Lake Placid arena is said to be 8,500 seats. Days and weeks after the victory, many thousands more claimed to have been there in person. The fast-talker never made that claim, at least not publicly.

In the locker room before the game, Coach Herb Brooks, a St. Paul, Minnesota East Sider, addressed his team from personal notes, along the lines of, “Great moments are born from great opportunity. You were born to be a player. You were meant to be here. This moment is yours.” Those 19- and 20-year old men (kids) from Roseau, Eveleth, Flint, Charlestown, and Madison heeded the coach’s prophetic words, winning 4-3.

USA! USA! America needed a winner and got one. USA! USA! At every opportunity, crowds across America waved the stars and stripes and even sang patriotic songs. The fast-talker remembers singing a little bit, too.

Two days later the U.S. team beat Finland to win the gold medal in a match that really was broadcast live and may have competed with other morning activities on the Sabbath. As an aside, a loss to the Fins would have meant gold medals for the Soviets.

Repeating a line from Lake Placid, “Do you believe in miracles? Yes!”

On January 23rd, the Wisconsin Department of Workforce Development (DWD) announced the preliminary December 2018 unemployment rates for Wisconsin’s 72 counties and the 32 cities with populations greater than 25,000 residents. St. Croix County’s rate was estimated at 2.8%. For comparison, St. Croix’s final rate for November was 2.6% and October’s final rate was 2.4%. One year ago, the county’s unemployment rate was estimated at 2.8%.

DWD said preliminary unemployment rates for December declined or remained the same in 52 of the 72 counties when compared to December 2017. The rates ranged from 1.9% in County to 5.4% in Bayfield.

The December 2018 preliminary unemployment rates declined or stayed the same in 26 of Wisconsin’s 32 largest municipalities. Nine cities tied or set a record for their lowest unemployment rate ever reported. Rates ranged from 1.9% in Fitchburg, Madison, and Sun Prairie to 3.8% in Racine.

St. Croix, Pierce, Polk, and Dunn counties comprise Wisconsin’s Greater St. Croix Valley. In addition to St. Croix referenced above, December’s preliminary rate in Dunn was estimated at 2.9%, followed by Pierce also at 2.9% and Polk at 3.9%.

For the eleventh consecutive month, the preliminary (seasonally adjusted) unemployment rate for Wisconsin was at or below 3.0%. For December, the rate was estimated at 3.0%, which is the same as the final rates for both November and October. One year ago, the state’s seasonally adjusted rate was 3.2%.

The preliminary (seasonally adjusted) unemployment rate in Minnesota in December was estimated at 2.8%, which is the same as the final rate for both November and October. Minnesota’s seasonally-adjusted rate one year ago was 3.3%.

December’s estimates are preliminary and are subject to revision within the next few weeks. 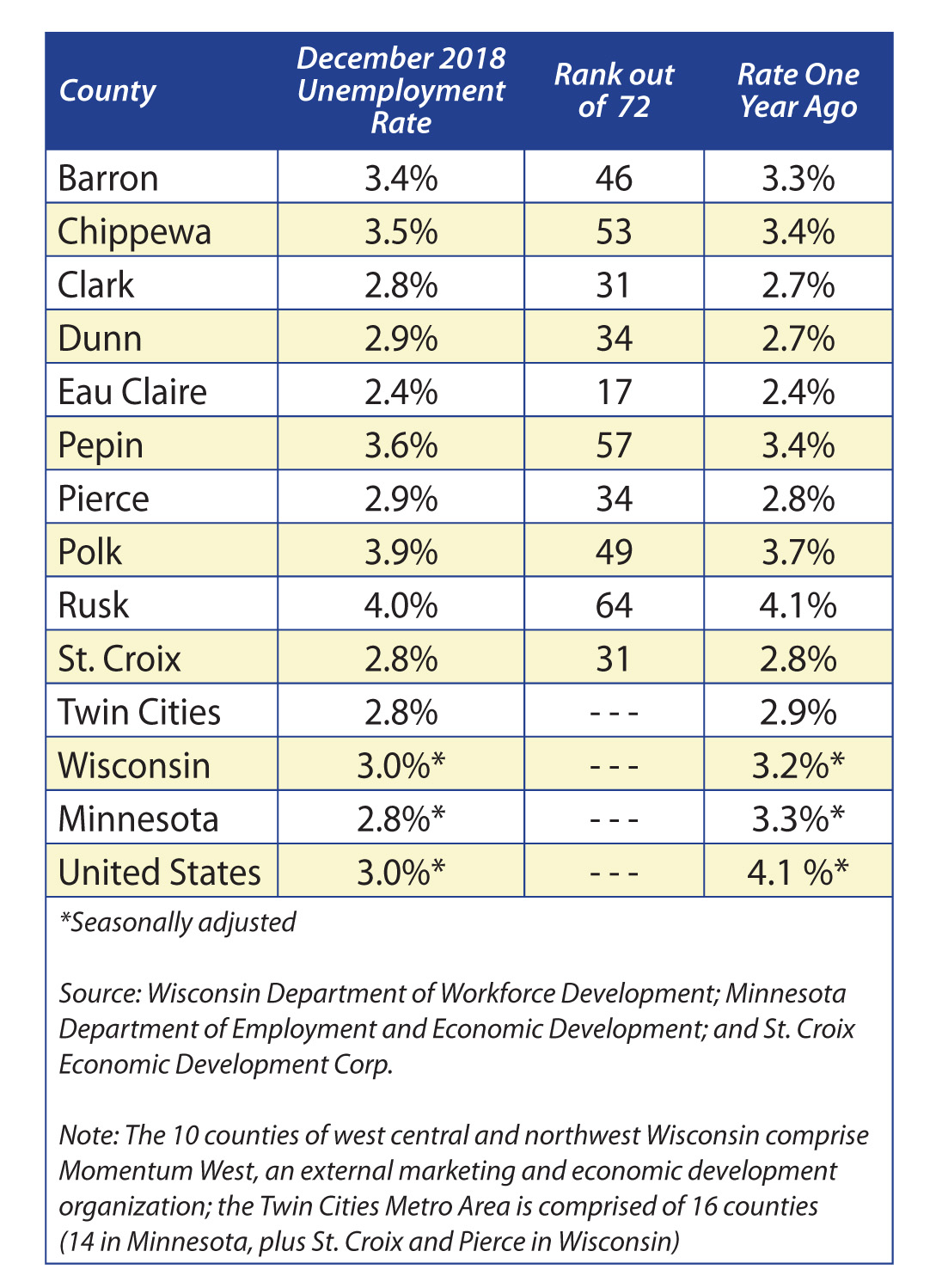 Madison, Wisconsin is said to be 77 square miles surrounded by reality. It is also Wisconsin’s capital city, where new laws are introduced and either sent to a dark hole or are debated and signed into law. Skeptics may say the faint hearted should avoid watching the bill-making process.

Each year, ‘citizen lobbyists’ descend on Madison to advance regional priorities with legislators. Given the poor reputation of lobbyists, most volunteers refer to themselves as advocates. The La Crosse area conducts Oktoberfest at the Capitol; Superior area has its Superior Days (plural), and the Chippewa Valley promotes its causes under the Chippewa Valley Rally theme. The Valley Rally includes a wrap-up reception featuring a Chippewa Falls-based brewery whose name rhymes with Leinenkugel.

As for St. Croix, its advocates team up with Polk, Pierce, and Dunn counties for the Greater St. Croix Valley Legislative Day and the 2019 event is set for February 6th. For those wishing to conduct business with cabinet secretaries, policy advisors, legislators or staff, it means a long day on the road before the Madison skyline comes into view. There’s a worn-out anecdote along these lines, The good news, Madison is four hours away; the bad news, Madison is four hours away.

Departure from Hudson is at 6:00 a.m. and following a pit stop at the Mauston exit, the somewhat weary volunteers arrive at the capitol around 10:30. There’s a group photo at 10:45 followed by orientation and box lunches before appointments in teams of two or three begin at 12:30 p.m. The timid or nervous have no place during the appointments. In rapid fire order, a legislator or staffer learns details on the St. Croix Valley, then successes and thank-you’s, and finally, the issues. Each team member is expected to present an issue or two. By the fifth or sixth appointment the routine is down pat.

In the early years of the legislative treks, a cabinet secretary put the work of the citizen-led activities into perspective. He said, “Your region could hire a lobbyist to deliver the message. It’s more effective coming from citizen volunteers.”

By 4:30 p.m., it’s time to load up the high occupancy vans and negotiate an exit from the capitol square. One of the founding volunteers continues to promise three full verses to a country western song entitled, Madison in My Rear View Mirror. Four and half hours later the travelers are in the St. Croix Valley. Mission Accomplished or Mission Impossible? They’ll track the current year’s issues and plan on doing it again in 12 months.

The St. Croix Valley is well represented in Madison. We’re proud of our legislators and the same is true from their perspective. This region continues to grow, which leads to a long list of wants and needs as well as the potential for stronger, if not additional representation. Even legislators from the most rural or most urbanized parts of the state have interest in places four hours from Madison. They should. A rising tide lifts all boats. The St. Croix Valley is a rising tide.

← Fables of a Passbook and Financial Literacy December 2018 Unemployment →