On May 22nd, the Wisconsin Department of Workforce Development (DWD) announced the preliminary April 2019 unemployment rates for Wisconsin’s 72 counties and the 33 cities with populations greater than 25,000 residents. St. Croix County’s rate was estimated at 2.9%. For comparison, St. Croix’s final rate in March was 3.6% and February’s final rate was 3.9%. One year ago, the county’s unemployment rate was estimated at 3.1%.

DWD said preliminary unemployment rates for April declined or remained the same in 68 of the 72 counties when compared to April 2018. The rates ranged from 1.9% in Dane County to 7.0% in Menominee.

The April 2019 preliminary unemployment rates declined or stayed the same year-over-year in 31 of Wisconsin’s 33 largest municipalities. Rates ranged from 1.9% in Fitchburg to 4.1% in Racine.

St. Croix, Pierce, Polk, and Dunn counties comprise Wisconsin’s Greater St. Croix Valley. In addition to St. Croix’s rate of 2.9%, April’s preliminary rate in Pierce was also estimated at 2.9%, followed by Dunn at 3.0% and Polk at 3.8%.

For the fifteenth consecutive month, the preliminary (seasonally adjusted) unemployment rate for Wisconsin was at or below 3.0%. For April, the rate was estimated at 2.8%, lower than then final rate of 2.9% for both March and February. One year ago, the state’s seasonally adjusted rate was 3.0%. 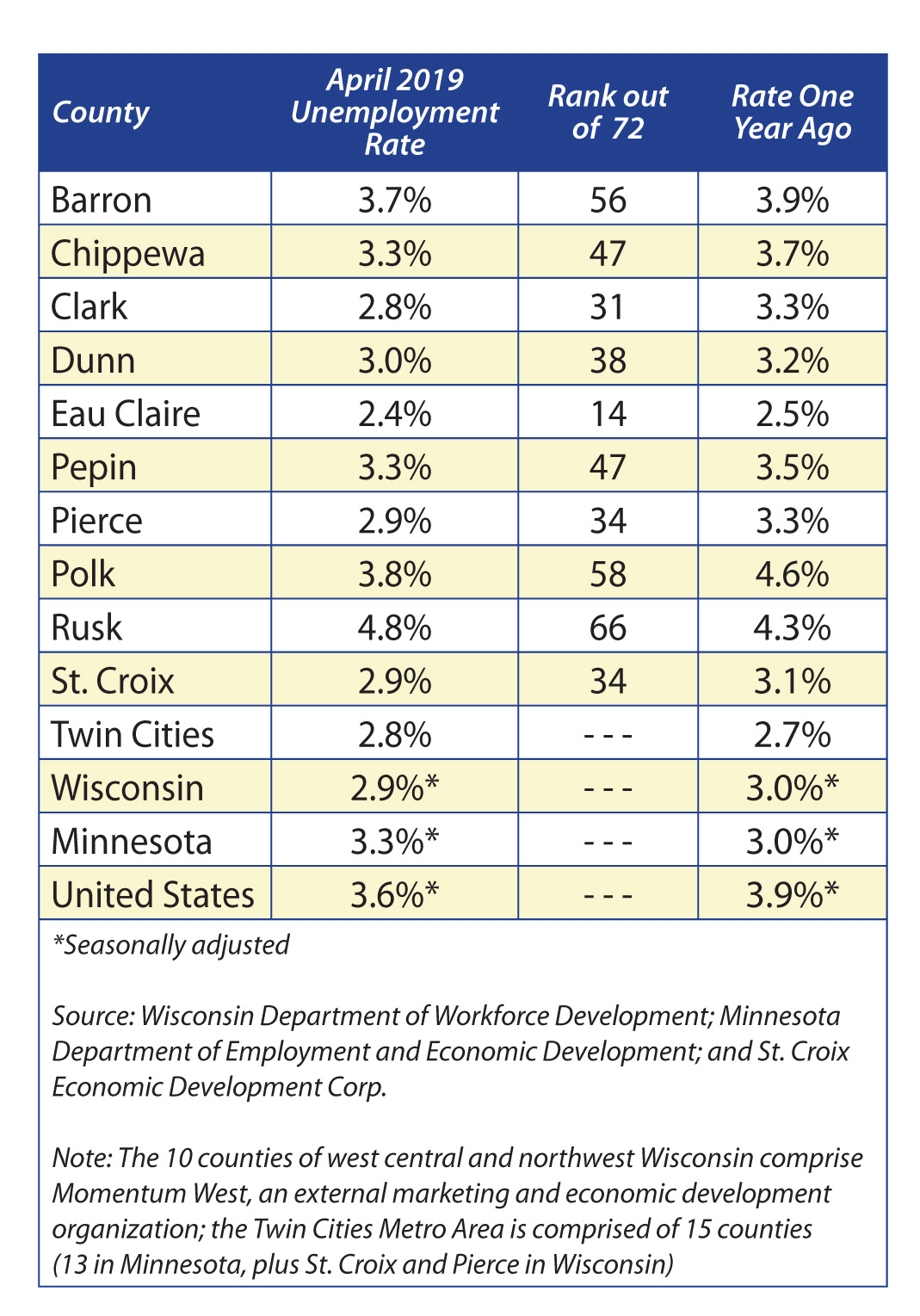 The time honored tradition of commencements is here.

Graduates will be reminded by more than one speaker that commencement is not an ending, but a beginning. And yes, there will be opportunities to hit the re-set button, whether the button pertains to getting one’s act together or following one’s heart to paths less traveled.

For high schoolers transitioning to college or universities, including technical colleges, the only way to determine if those pegs fit into holes is to give it a try. Hopefully it is not an expensive lesson. Some may be ready; others, not so much. The following was overheard from a clerk at a convenience store, “I went to fill-in-the-blank college (identity withheld) for a year, but didn’t like it (or pick the reason).” And so it goes.

College and high school grads are entering a hot-hot-hot job market. Starting a few years ago, more people were retiring than entering the labor market. Wisconsin’s unemployment rate for April is at the historic low rate of 2.8 percent. The U.S. rate is at an unheard rate of 3.6 percent. If you believe news from the Department of Labor, a recent report suggested there were 7.8 million jobs openings in the U.S. The harsh reality: the gap between this estimate and number of unemployed people was 1.3 million. Yep, more jobs than people. In Wisconsin alone, the jobs bank has 90,000+ openings.

To the grads of 2019, Congratulations! It’s time to take it to the next level. The St. Croix Valley is a special place. Many grads will discover this along the way. Employers here have plenty of openings, too.

Tourism Spending Up In 2018

Tourism is one of Wisconsin’s top three industries along with manufacturing and agriculture.

For additional information, or to read the 2018 Economic Impact of Tourism in Wisconsin go to
http://industry.travelwisconsin.com/research/economic-impact and select the topic: “County Total Impact”.