For a kid growing up in southern Minnesota hoping he had the right stuff to become a fast-talking economic development guy, baseball’s all-star game signaled the beginning of the end to summer. Farewell summer, we hardly knew ye, meaning a rural school with grades K-12 all under one roof would soon spring back to life.

The all-star game represents the approximate mid-point of baseball’s 162-game season. Players not selected to represent the National or American League welcome the three or four days away from the game. In the olden days, i.e. the 1950s, 60s and 70s, some of the players may have picked up some extra cash at part-time jobs. Things have changed, including, but not limited to, the use of private aircraft to jet away over the break.

The all-star game got the fast-talker thinking about how players circled the bases after hitting a homer, referred to as the home run trot. Black-and-white highlight reels depict George Herman “Babe” Ruth with a choppy stride around the bases. Choppy? Ruth trotted more than 48.5 miles after hitting 714 career home runs. A three home run game for Babe was two-tenths of a mile maintaining that steady but choppy trot.

Other ball players had different approaches to circling the bases. Harmon Killebrew and Henry Aaron were business-like with their trots, reflecting a bygone area.

Pete Rose sprinted around the bases as if the umpire had a starter’s pistol used at track meets.

Kirk Gibson, a former Michigan State football player who found greater success with baseball, had a memorable home run for the Dodgers in the 1988 World Series. Two bad knees meant Gibson had one at-bat in the series and it was as a pinch hitter. In dramatic style he made the most of it with a walk-off home run to win the game. Gibson agonizingly circled those bases on painful knees and added a couple of colorful fist pumps around second base for emphasis.

Rickey Henderson put style in his trots, including the bat flip and extra wide turns as he approached each base. Usually talking to himself during his trot, Henderson had a way of showing up the opposing pitcher, the opposing infield players, outfielders, and maybe even the bat boy if his homer was at a visiting stadium.

Those Major League trots are far different than what is witnessed at local playgrounds and high school fields. The home run is less common. The young batter may be between first and second base before realizing the accomplishment. Hands are slapped. There’s pure glee. The sprint may be slowed to include a bouncing stride. And of course there’s a glance to the dugout to gauge the level of approval from teammates. They’ll be waiting at home plate for their congratulations for sure.

In baseball, in life, in business, industry, or classroom there may be the need to break into a mythical home run trot. Have some fun with it. Respect the game.

On June 26th, the Wisconsin Department of Workforce Development (DWD) announced the preliminary May 2019 unemployment rates for Wisconsin’s 72 counties and the 33 cities with populations greater than 25,000 residents. St. Croix County’s rate was estimated at 2.5%. For comparison, St. Croix’s final rate in April was 2.9% and March’s final rate was 3.6%. One year ago, the county’s unemployment rate was estimated at 2.6%.

DWD said preliminary unemployment rates for May declined or remained the same in 47 of the 72 counties. The rates ranged from 2.2% in Dane County to 5.7% in Menominee.

May’s 2019 preliminary unemployment rates declined or stayed the same year-over-year in 22 of Wisconsin’s 33 largest municipalities. Rates ranged from 2.1% in Fitchburg to 4.1% in Beloit.

St. Croix, Pierce, Polk, and Dunn counties comprise Wisconsin’s Greater St. Croix Valley. In addition to St. Croix’s rate of 2.5 %, May’s preliminary rate in Polk was estimated at 2.6%, followed by 2.7% in Pierce, and 3.0% in Dunn.

For the sixteenth consecutive month, the preliminary (seasonally adjusted) unemployment rate for Wisconsin was at or below 3.0%. For May, the rate was estimated at 2.8%, which is the same as April’s final rate and lower than the final rate of 2.9% for March. One year ago, the state’s seasonally adjusted rate was 3.1%.

The preliminary (seasonally adjusted) unemployment rate in Minnesota in May was estimated at 3.3%, which is the same as the final rate for April, but higher than March’s final rate of 3.2%. Minnesota’s seasonally-adjusted rate one year ago was 2.9%. 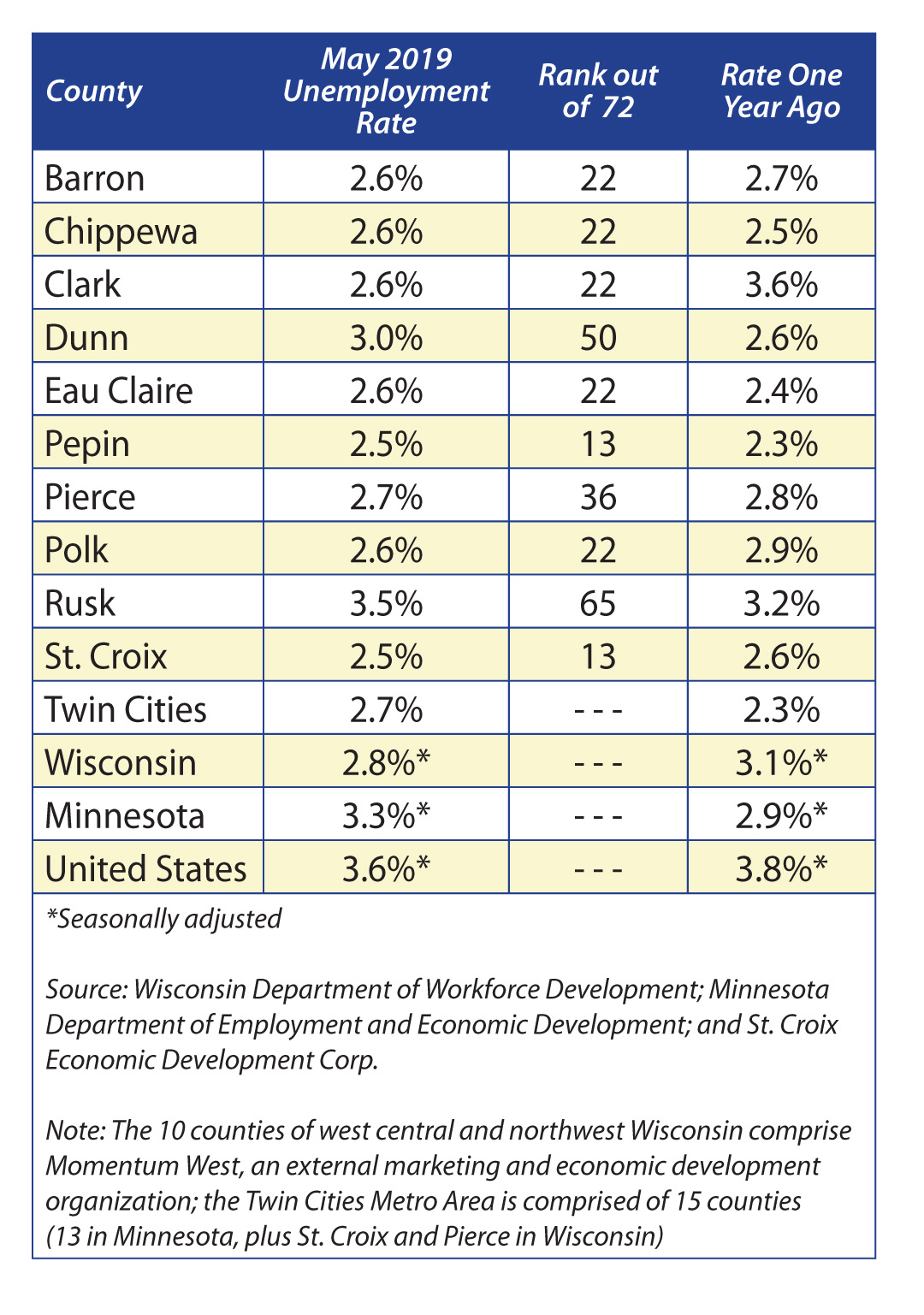 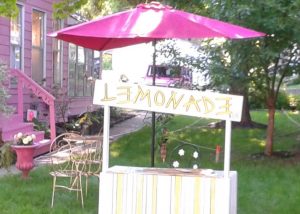 Even in a dairy rich state like Wisconsin, and in the Dairy Month of June, there’s still room for neighborhood lemonade stands in the St. Croix Valley. Running a lemonade stand represents Free Enterprise 101 and the Basics of Entrepreneurship all rolled into one, whether the youthful operators realize it or not. More than one successful business person has said the lowly lemonade stand was their start in the business world.

Of course some stands are subject to over-regulation, i.e. the wrong zoning, lack of a permit, hours of operation, and spontaneous laughter and fun. Texas Governor Greg Abbott recently signed a law that legalizes lemonade stands. Legalizes? He called it a common sense law, and cited a 2015 incident in which the police shut down a lemonade stand run by a couple of girls who were raising money for a Father’s Day gift. Hooray, common sense prevails.

Profit, loss, cash flow? Who cares? These are little kids with big hearts. Many times the money from lemonade sales goes to worthy causes – the parent’s out-of-pocket share to send a son or daughter to Washington, D.C., or the Ronald McDonald House, or a local food pantry. Don’t forget to tip. A dollar in the tip jar has huge impacts. Better yet, decline the lemony drink and just leave a tip.

Market saturation is occasionally observed. One stand may lead to another, directly across the street. A price war ensues, followed by kids with placards up the street to alert oncoming traffic of the preferred stand. And this is how fast food restaurants end up on three of four corners of an intersection. The fourth corner is perhaps a national chain coffee shop.

Product diversification may be required. Lemonade is morphed into flavored lemonade, or cookies offered for an extra quarter, followed by a candy dish with a note requesting donations. A favorite internet lemonade stand story involves the use of Skittles® to create strawberry lemonade. It seems the stand’s operators found a shortcut with the Skittles® flavoring and boiled them in a mom’s heated foot massage tub.

We live in a great country. Capitalism is alive and well. For some, it starts at an early age along a street with a cardboard stand. Lessons are learned. Weather can be fickle. Competition can be fierce. The strong and determined survive.

← The Greatest Generation May 2019 Unemployment →

Many recall Tom Brokaw as a news anchor at NBC.

He’s also the author of several books, including The Greatest Generation. Brokaw was among the first to use ‘greatest generation’ to frame Americans who were born in tough times, survived The Great Depression (not to be confused with The Great Recession), got tougher during a World War, returned home, started families, and above all, worked hard to keep America great, long before a similar phrase gained popularity.

The Internet says members of The Greatest Generation were born between 1910 and 1924, making the youngest around 95 years old and the oldest 109. Alas, there are fewer and fewer. For the record, a tough-as-nails WW II veteran rests in peace in a cemetery in southern Minnesota. A certain economic development official in the St. Croix Valley has a connection to him.

A turning point in world history is celebrated each June 6th. It’s called D-Day. Allied Forces converged on the beaches of Normandy France to beat back the German military. This June 6th marks the 75th anniversary of a truly historic event.

On that note, here are a few quotes from Brokaw’s Greatest Generation:

“There has never been a military operation remotely approaching the scale and the complexity of D-Day. It involved 176,000 troops, more than 12,000 airplanes, almost 10,000 ships, boats, landing craft, frigates, sloops, and other special combat vessels–all involved in a surprise attack on the heavily fortified north coast of France, to secure a beachhead in the heart of enemy-held territory so that the march to Germany and victory could begin. It was daring, risky, confusing, bloody, and ultimately glorious.”

“When the war ended, more than twelve million men and women put their uniforms aside and returned to civilian life. They went back to work at their old jobs or started small businesses; they became big-city cops and firemen; they finished their degrees or enrolled in college for the first time; they became schoolteachers.”

“They married in record numbers and gave birth to another distinctive generation, the Baby Boomers. They stayed true to their values of personal responsibility, duty, honor, and faith.”

The old guy from southern Minnesota embodied Brokaw’s description. He returned home from service a partially disabled vet, started a family, had a rural mail delivery route (more of Uncle Sam), pounded a fair share of nails as a carpenter, marched in countless parades, and was active in his community.

Once in a while you’ll read about someone in their 90s, male and female, still working. They love work, but there’s less and less of them, too. Wagering a cup of coffee, a sure bet says most employers would hire a member of The Greatest Generation in a heartbeat. Young workers could learn many lessons, starting with work ethic, continuing with loyalty, and ending in pride.

Here’s to The Greatest Generation.