On August 2, 2017 several thousand people along with local, state, and national dignitaries, helped open the St. Croix Crossing, a joint project between the Wisconsin and Minnesota transportation departments.

The project endured a long history, some say going back to the 1970’s; others saying going back to flooding in the early 1950s, or just about 20-years after the lift bridge opened in downtown Stillwater, Minnesota in 1931. Over time, the term ‘historic’ was used to describe the lift bridge. It became functionally obsolete and needed replacing.

The new crossing was constructed over a protected river, the St. Croix, under the watchful eyes of critics and supporters.

It took an executive order by one U.S. President and a signature on federal legislation by another President to make the project a reality.

In September 2002, President George W. Bush issued an executive order to speed up federal environmental studies of major transportation projects throughout the U.S. The federal Department of Transportation (DOT) created a list of high priority transportation projects slowed by reviews and legal disputes. Replacing the lift bridge was among the first ten or so projects on the national list.

The environmental streamlining process brought numerous agencies and organizations together in a facilitated process in hopes a consensus could be reached on replacing the lift bridge. Between June 2003 and July 2006 a stakeholder group met at the Stillwater, Minnesota city hall to find common ground and solutions. The group recommended a bridge design and corridor about one mile south of the lift bridge.

In November 2006, the Federal Highway Administration issued its Record of Decision, meaning all project studies and reviews were complete, putting the new river crossing project in line for future funding and construction. Public comment of the Record of Decision remained open for 180-days. Near the close of comments, a lawsuit was filed.

Additional environmental reviews were done by the National Park Service (NPS), one of the participants in the stakeholder process. NPS recommended that no bridge be constructed over the St. Croix regardless of location or design because of the its protected qualities under the federal Wild and Scenic Rivers Act. How to obtain an exemption to the Wild and Scenic Rivers Act was outlined by NPS.

An effort to secure the exemption soon started in Washington, D.C. It was first approved by the U.S. Senate and then by the House of Representatives. President Barack Obama signed the legislation in March 2012.

The Minnesota DOT immediately commenced work on test borings into bedrock beneath the river bottom. Those test results gave prospective bridge construction bidders valuable details on conditions and stability. By ice-out in 2013, the construction project got underway, and in mid-2017, the project was substantially completed and ready to open.

If one bridge opens, another would close. The historic lift bridge in Stillwater closed simultaneous to the opening of the St. Croix Crossing. In June 2020, the rehabbed lift bridge opened as a recreational amenity for walkers, runners, and bicyclists to enjoy. Multi-use paths in Wisconsin and Minnesota connect the old lift bridge to the new crossing downstream, creating a nearly five mile loop.

Happy birthday, St. Croix Crossing. Welcome to a transformed use, historic lift bridge. Both are outstanding amenities in the St. Croix Valley of Wisconsin and Minnesota. 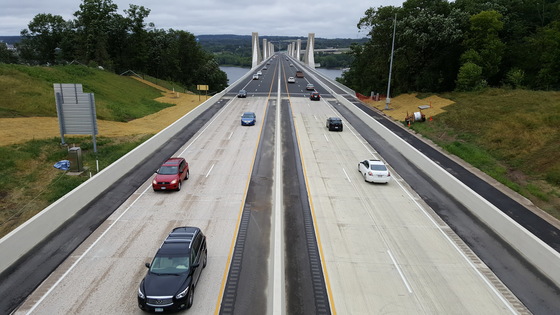 On July 22nd, the Wisconsin Department of Workforce Development (DWD) announced the preliminary June 2020 unemployment rates for Wisconsin’s 72 counties and the 34 cities with populations greater than 25,000 residents. St. Croix County’s June rate was estimated at 9.8%, which is lower than the final rate of 13.9% for May and April’s final rate of 16.1%. One year ago, the county’s unemployment rate was estimated at 3.4%.

DWD said preliminary unemployment rates from May to June decreased in all of the 72 counties, but increased for all year-over-year. The rates ranged from 5.7% in Lafayette to 20.0% in Menominee.

Preliminary unemployment rates decreased in all of Wisconsin’s 34 largest municipalities from May to June and increased in all year-over-year. Rates ranged from 6.8% in Fitchburg to 12.8% in Milwaukee.

The preliminary (seasonally adjusted) unemployment rate in Minnesota in June was estimated at 8.6%, which is lower than May’s final rate of 9.9% and April’s final rate of 8.7%. Minnesota’s seasonally-adjusted rate one year ago was 3.2%. 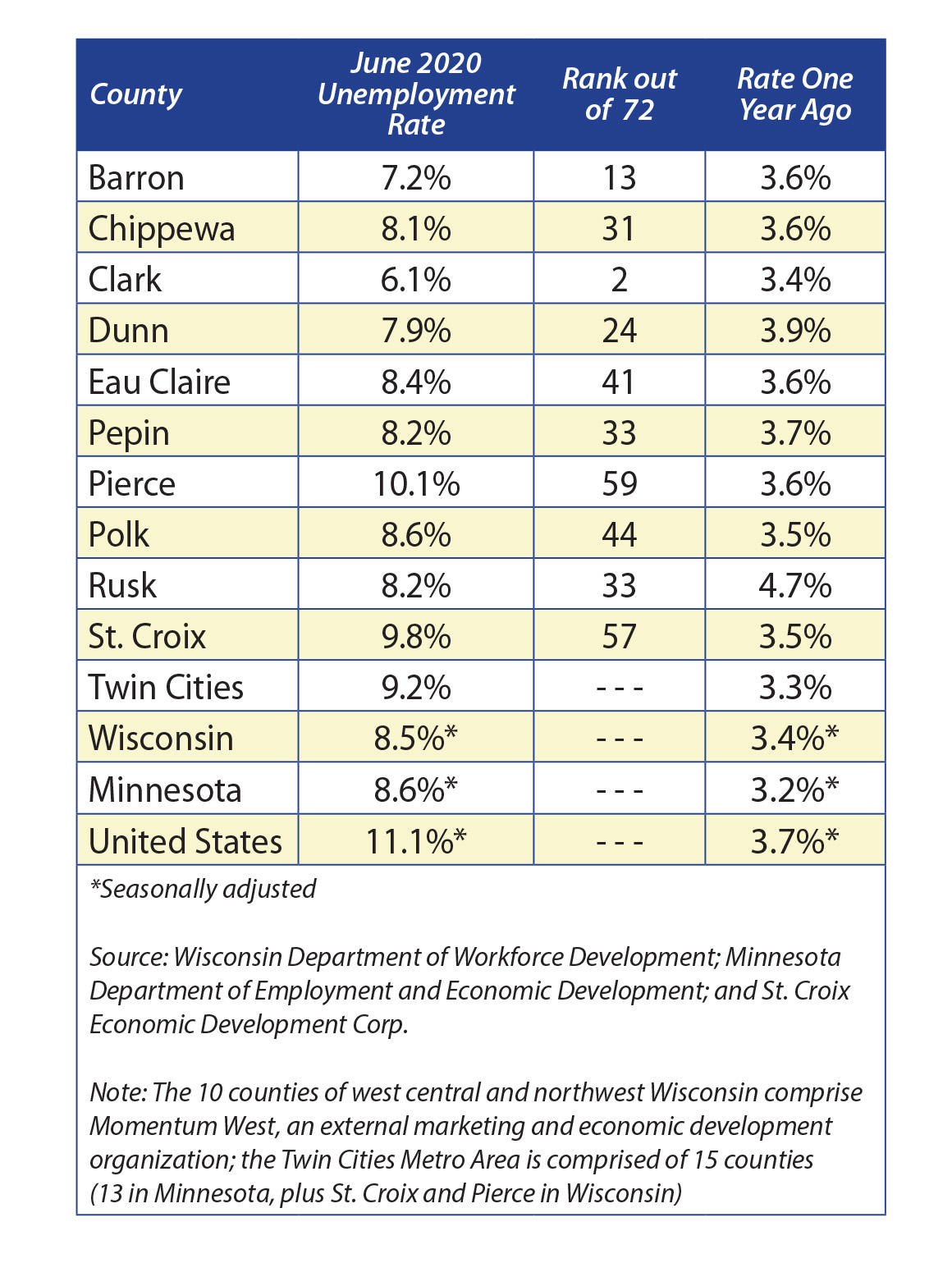 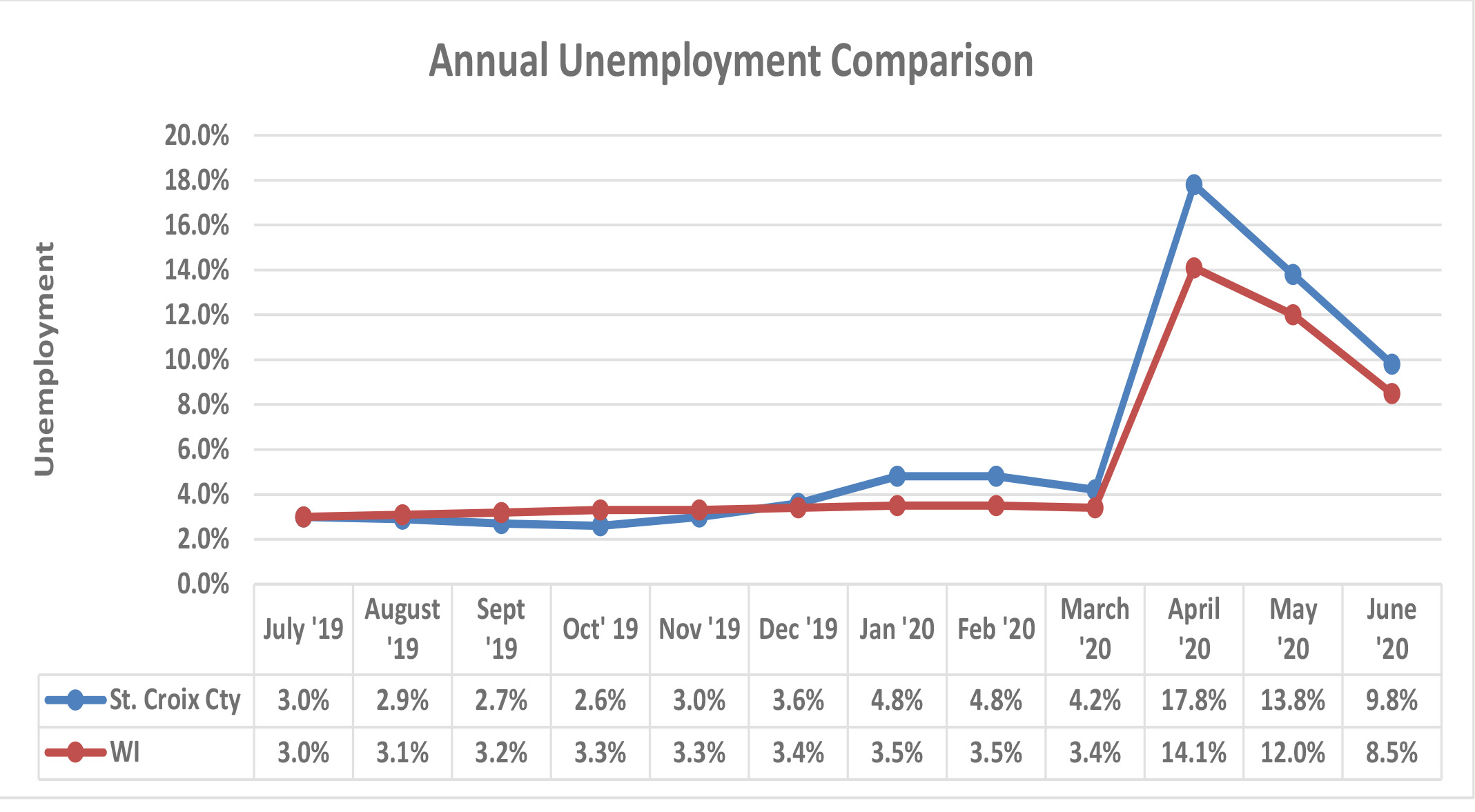 In 1983, the all-female musical group Bananarama proved to be prophetic when “Cruel Summer” was released. The group did not envision a global pandemic decades later, but 2020 has indeed proven to be a Cruel, Cruel (COVID-19) Summer. The same can be said for last Spring. And likely the upcoming Autumn. And beyond.

The impacts of COVID have been felt in all corners of the Earth. But the impacts start locally and add up, just like a snowball rolling down a hill. Think about a popular bar and grill, main street shop, salon, or micro-brewery. All were shuttered for numerous weeks starting in March. It boiled down to an essential versus nonessential designation for business and industry. Safety first. Cruel, Cruel Summer.

Each community in the St. Croix Valley has one or more celebrations during the year. All or most are cancelled. There goes the parade, royalty coronation, 5K and 10K runs, and street dance, etc. Many of the festivals are governed by a board which puts money back into their communities through donations supporting local nonprofits or special projects. The loss of donations may sting the most. Cruel, Cruel Summer.

In case you think a concession stand’s loss of revenue is no big deal, just consider the really, really big community celebration called the Minnesota State Fair. Sweet Martha’s Cookies is widely regarded as the top vender at the fair with revenue of $4.7 million in 2018. If Martha’s 2019 revenues were up five percent, the sales would be around $5 million. Cruel, Cruel Summer.

In Wisconsin, UW-Madison’s athletic department recently forecast a $60 million revenue loss for 2020-21 and it could grow to $100 million if football is cancelled. Jump Around! That’s a lot of money. Think about the concessionaires, the ticket-takers, the innkeepers, the pre- and post-game gatherings, and the brats ’n beer. All of those lost revenues are outside UW’s forecasts. Cruel, Cruel Summer.

Is there hope? First, play it safe and stay healthy. Then, shop local. Chambers of Commerce are famous for their Chamber Bucks programs. Those bucks can be purchased using cash or checks at the local chamber office. They can be used just like cash at almost any store, assuming it’s a chamber member. They never expire and there are no fees. Local businesses treat the bucks like regular currency. Main Street’s vibrancy may depend on a system like this going forward.

Back to Bananarama. Their Cruel Summer song ended up on the song track to the 1984 movie, Karate Kid, allowing it to reach the Top 10 in Billboard’s Hot 100. Karate Kid is along the lines of “Rocky” for kids. Remember what happened to Ralph Macchio’s character, Daniel? Thanks to the guidance of his mentor Mr. Miyagi (Pat Morita), Daniel used the crane stance to win the tournament over his bullies. Of course there was a love interest involved, too.

Cruel, Cruel COVID Summer? Not with a crane stance and your support of local businesses, who could really use it. Here’s to a Cool, Cool Summer the rest of the way and beyond.

On July 14th, St. Croix County, Wisconsin announced the launch of its COVID-19 Small Business Loan Program. It was created to help businesses in the county currently experiencing unanticipated financial pressures due to the COVID-19 pandemic.

$500,000 was allocated to the loan relief fund by unanimous action at the July 7th county board of supervisors meeting.

Loan proceeds can use be used to help with rent/mortgage payments, commercial utilities, preexisting purchase orders (placed prior to June 15, 2020), payroll expenses, and modifications and/or upgrades related to adjusting business practices due to COVID-19.

Loan applications are accepted from July 14 through September 10, 2020.

Learn more and obtain a link to the application at https://www.sccwi.gov/958/Small-Business-Loan.

On June 24th, the Wisconsin Department of Workforce Development (DWD) announced the preliminary May 2020 unemployment rates for Wisconsin’s 72 counties and the 34 cities with populations greater than 25,000 residents. St. Croix County’s May rate was estimated at 13.8%, which is lower than the final rate of 16.1% for April and March’s final rate of 4.0%. One year ago, the county’s unemployment rate was estimated at 2.8%.

DWD said preliminary unemployment rates from April to May decreased in 69 of the 72 counties, but increased year-over-year in all counties. The rates ranged from 7.0% in Taylor to 31.2% in Menominee.

Preliminary unemployment rates decreased in all of Wisconsin’s 34 largest municipalities from April to May and increased in all of them year-over-year. Rates ranged from 8.2% in Fitchburg to 17.5% in Superior.

The preliminary (seasonally adjusted) unemployment rate in Minnesota in May was estimated at 9.9%, which is higher than April’s final rate of 8.7% and March’s final rate of 2.9%. Minnesota’s seasonally-adjusted rate one year ago was 3.2%. 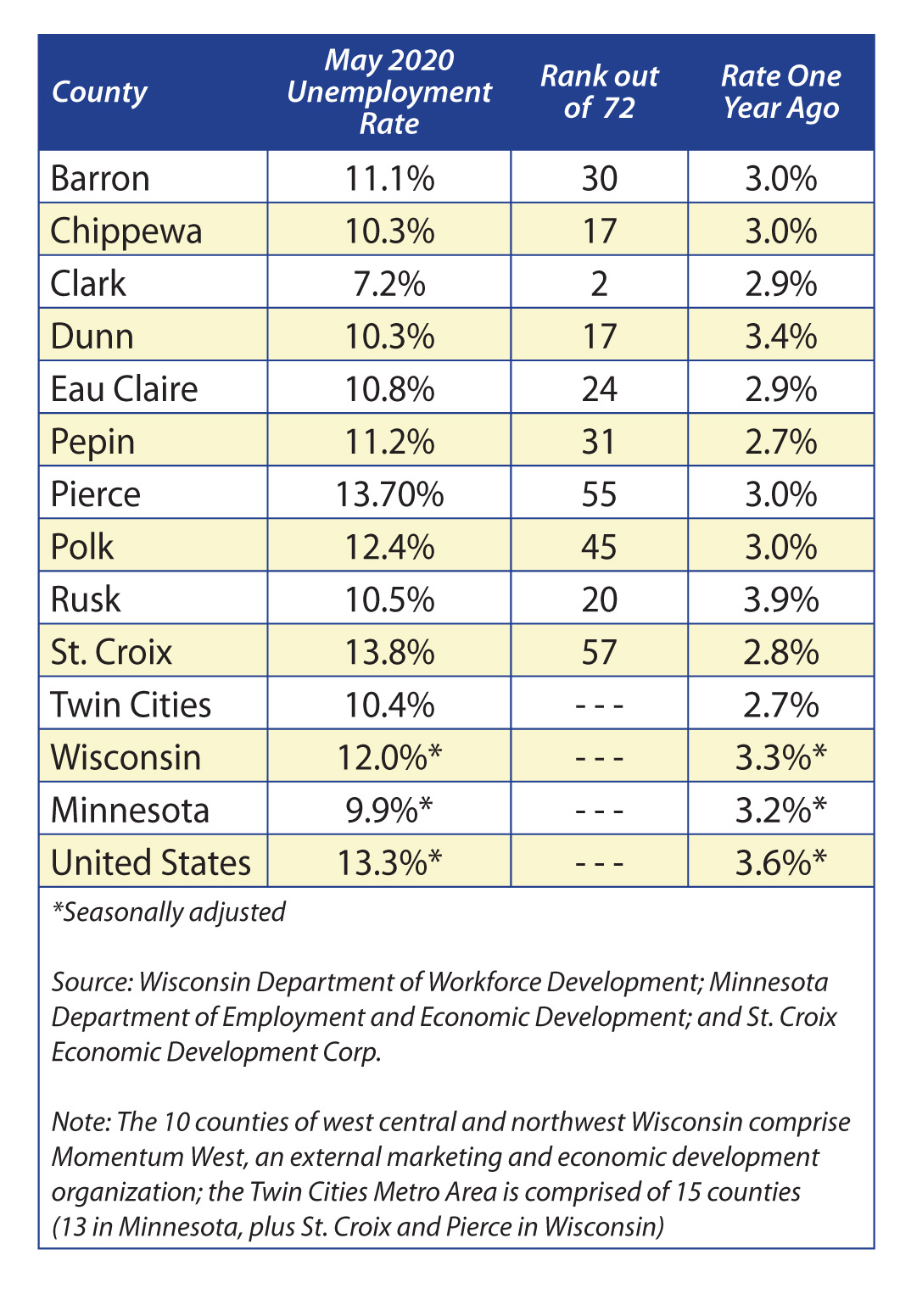