Nominations Open for 2020 Business Of The Year

Nominations Open for 2020 Business of the Year 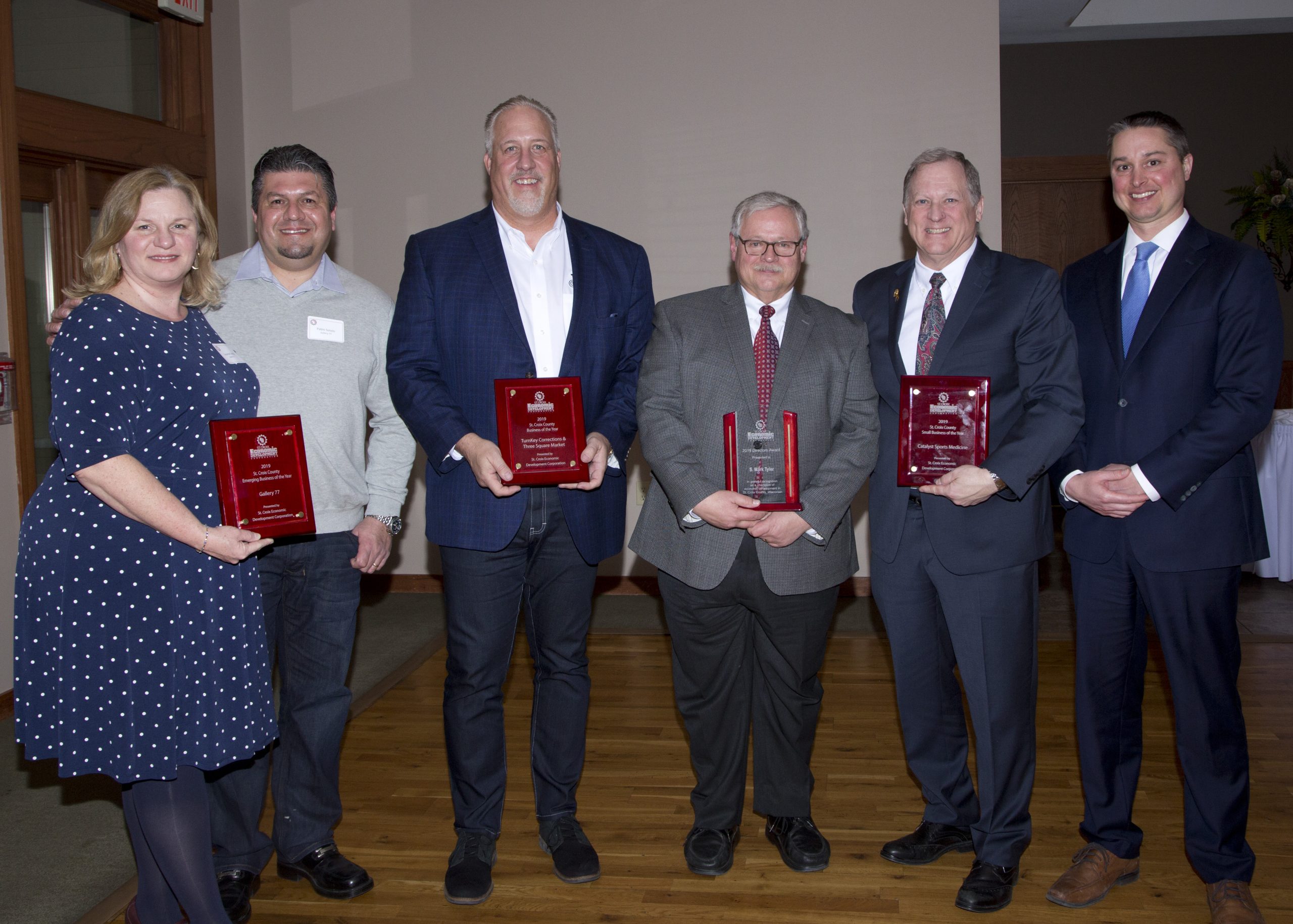 St. Croix EDC is accepting nominations for its 2020 Business of the Year awards program.

Qualifying companies must be involved in manufacturing, distribution, construction, health care, or must be a service provider to other companies. Companies must be operated for profit. (Retail companies are not eligible.)

Individuals may nominate a company in any of the categories or a business may place their company’s name in nomination.

The honorees will be announced in January and recognized at an event in mid-February. The format of the event is yet to be determined.

A nomination form and guidelines can be obtained by clicking here or contacting Nita Dusek at nita@stcroixedc.com or (175) 381-4383. The deadline to submit is Friday, December 18, 2020 at the close of business.

On October 21st, the Wisconsin Department of Workforce Development (DWD) announced the preliminary September 2020 unemployment rates for Wisconsin’s 72 counties and the 34 cities with populations greater than 25,000 residents. St. Croix County’s September rate was estimated at 4.8%, which is lower than August’s final rate of 6.3% and July’s final rate of 7.8%. One year ago, the county’s unemployment rate was estimated at 2.6%.

DWD said preliminary unemployment rates from August to September decreased in all 72 counties over the month. The rates ranged from 2.6% in Kewaunee to 12.8% in Menominee.

Preliminary unemployment rates declined in all of Wisconsin’s 34 largest municipalities from August to September. Rates ranged from 3.5% in Oshkosh to 8.4% in Milwaukee.

September’s estimates are preliminary and are subject to revision within the next few weeks. 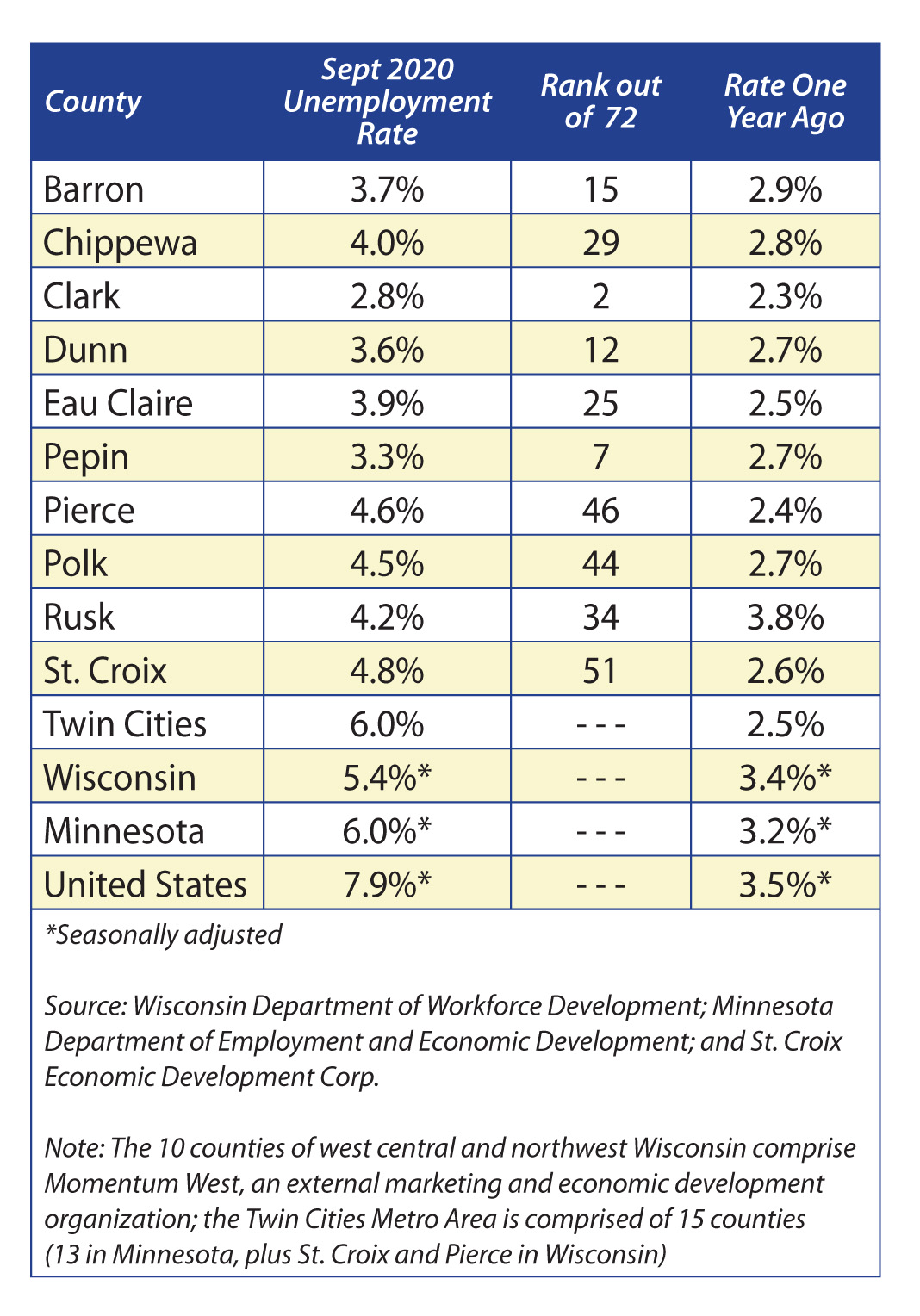 Veterans Day approaches. Unlike Memorial Day which pays tribute to those who died serving in the military, Veterans Day honors all who served. The younger generation may appreciate a backgrounder on the topic while the older, seasoned generation may use it as a review.

The Great War, World War I, officially ended when the Treaty of Versailles was signed on June 28, 1919. The treaty came after seven months of on-again, off-again combat when the adversaries put a temporary stoppage in place on November 11, 1918 – the eleventh hour of the eleventh day of the eleventh month. The stoppage was also called an armistice. The term, the war to end all wars, was widely used to mark the armistice.

November 11, 1919 was the inaugural Armistice Day observance, as proclaimed by President Woodrow Wilson.

Federal legislation in 1938 made the 11th of November of each year a legal holiday. Armistice Day was still the term used to honor the veterans. But given World War II in the 1940s, Korea in the 50s, and the mobilization of hundreds of thousands of soldiers, sailors, Marines, and air corps (later the Air Force), Congress amended the 1938 Act in 1954 with the term Veterans instead of Armistice.

Another federal law passed in 1968 established three-day weekends for federal employees for four national holidays on Mondays, including Veterans Day.

Old school patriotism and historic pride returned Veterans Day to its original observance on November 11th, starting in 1978. It continues to be observed on the 11th, regardless of the day of the week. Whether on a Tuesday or Saturday, Veterans Day continues to honor America’s vets for their duty, service, patriotism, and sacrifice for the greater good.

The profile of veterans is ever changing. They are older and less healthy. According to stats from the U.S. Department of Veterans Affairs, around 389,000 of the 16 million Americans who served in World War II were alive in 2019. Almost 300 die each day. Vietnam era veterans likely have a median age greater than 68 years. Memories are fading with each passing, regardless of the military branch or service era.

And what’s the oldest branch of the military, Army or Navy? Try the National Guard, established in 1636 when blacksmiths, farmers and ordinary citizens formed militias to defend the colonies against attacks. This means the Guard’s citizen-soldiers have served as the nation’s first line of defense since before America’s independence and have fought in every major conflict in America’s history.

Citizen-soldiers possess both civilian and military skills to enable the National Guard to conduct a wide array of missions, at home or overseas. Duties and roles may include aviators, engineers, emergency responders, peacekeepers, truck drivers, mechanics, and legal. Guards who deploy face disruption in careers and families for lengthy stints. Both are stark realities.

Thanking a vet is easier said than done. Many are unassuming but likely can be found next door or in the neighborhood. Here’s a tip. Attend a Veterans Day program, hopefully in person and while observing social distancing. Our veterans will be there. The St. Croix Valley thanks them all. Honor all who served.

What do the countries of Samoa, Grenada, and Barbados have in common with Halloween? It’s almost certain calendars in these countries mark October 31st without the notation of Halloween. Just another day in paradise for them. Economists meanwhile like to use a country’s gross domestic product (GDP), the total value of goods produced and services provided annually, to measure the size of its economy. The more goods produced or services provided, the bigger the economy.

Halloween should be a country. America’s love affair with Halloween spending usually exceeds the gross domestic product of 25-30 counties each year. In 2014, AGFinancial reported Halloween spending in the U.S. exceeded the GDP of 11 counties – combined! That’s a lot of licorice and theatrical make-up.

There are numerous websites and reporting bureaus dedicated to forecasting Halloween spending. The National Retail Federation (NRF) is one of them. NRF says it has conducted an annual Halloween survey for over a decade and sometime between September 1-9 over 7,600 consumers were contacted about 2020 Halloween spending.

The results are frightening, even in a global pandemic. More than 148 million adults plan to participate in Halloween activities, but overall participation is down to 58 percent. House parties, handing out candy, or visits to haunted houses have dropped because of social distancing concerns. An estimated 17 percent of surveyed adults plan virtual celebrations.

What’s Halloween without a little candy? Why stop at the 100-piece bag when there’s a mega-bag on the next shelf? Last year NRF forecast $2.6 billion was spent on candy, or about $25 per person. More will be spent in 2020, and this is not approved by the St. Croix Valley Dental Association, if one exists.

Yes, adults still dress up for Halloween. NRF says the most popular 2020 adult custom will be a witch, followed by vampire, cat, Batman, and ghost. No presidential candidates? Upon further contemplation, costumed candidates may find themselves in personal peril. A COVID grim reaper likely faces the same reaction. Should he/she come knockin’ do not answer.

Halloween is not a Holiday. At worst, Halloween is somewhat of a springboard for even more consumer spending leading up to Holidays in November and December. At best, Halloween is a short escape into another persona. In the St. Croix Valley, we are reminded to be safe and keep others around you safe, too. Have safe fun.

A Conversation with Dale Knapp of Forward Analytics 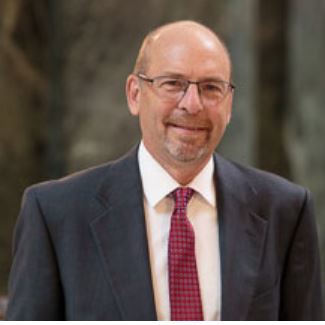 An interactive conversation with Demographer Dale Knapp of Forward Analytics, Focusing on Demographic Trends Impacting Businesses in Western Wisconsin was held on Wednesday October 7, 2020. You can view and/or download the recording here until November 7, 2020, the slides from the presentation here, and the information he referred to here.

Dale publishes research and analysis on a variety of economic and public policy issues facing the State of Wisconsin. He has written extensively on Wisconsin school finance, the state economy and demographics, and state fiscal health. Prior to joining the Wisconsin Counties Association and Forward Analytics, Dale spent almost 18 years with the Wisconsin Taxpayers Alliance.

Forward Analytics was created in 2018 and is a division of the Wisconsin Counties Association.

Recent research publications from Forward Analytics include The Rural Challenge, Depopulation and its Economic Consequences; and Economic Activity in a Pandemic: Wisconsin Taxable Sales in March and April.

← 2nd Round of "We're All In" Grants Halloween Spending: Frightening →

2nd Round of “We’re All In” Grants

Includes second round of We’re All In Grants and investments in tourism, entertainment, and cultural venues

On October 6th, Wisconsin Governor Tony Evers announced more than $100 million in investments aimed at providing additional economic stabilization for small businesses and communities hardest hit by the COVID-19 pandemic. The announcement includes a second round of WEDC’s We’re All In Grants plus stabilization programs to support the lodging and tourism industry, live music and performance venues, cultural non-profits, and privately-owned movie theaters.

“Small businesses, including the tourism and lodging industries, are the backbone of our Wisconsin communities,” said Gov. Evers. “That’s why we’re investing another $100 million in businesses and communities across our state.”

$50 million is reserved for We’re All In Grants, an economic development grant program launched by Wisconsin Economic Development Corporation (WEDC) this summer. Statewide, more than 26,000 businesses received the grants, but many continue to face economic challenges from the pandemic. We’re All In applications open at 8:00 a.m. on Monday, October 19th and close at 11:59 p.m. on Monday, November 2nd. As with the previous round of WEDC grants, the awards will not be made on a first-come, first-served basis. Businesses that received funds under the first round of grants, as well as the Ethnic Minority Emergency Grant program, are also eligible for the second round. Priority will be given to businesses that have not previously received funds from either of the first two programs, those with ethnically diverse ownership, and those in the hardest-hit sectors, such as restaurants and taverns, hair and nail salons and barber shops, and other services. The grants will be administered by the Wisconsin Department of Revenue in partnership with WEDC. Learn more about the program and apply at www.revenue.wi.gov.

$20 million of the $100 million is for the state’s lodging industry. The investment provides the lodging industry with emergency resources to navigate a reduction in travel and cover the cost of implementing additional public health best practices as the pandemic continues.

$15 million is included for live music and performance venues. Music venues were among the first small businesses to close and may be among the last to fully re-open.

$10 million will support privately-owned movie theaters, which have not been spared the financial strain felt by movie theater companies.

$10 million is included in additional support for non-profit cultural venues, bringing the total investment to $15 million.

$4 million of additional investments is included for destination marketing organizations and tourism drivers, bringing the state’s total investment to $12 million.

All of the efforts are funded through the Federal Coronavirus Aid, Relief, and Economic Security (CARES) Act Coronavirus Relief Fund (CRF).