On May 26th, the Wisconsin Department of Workforce Development (DWD) announced the preliminary April 2021 unemployment rates for Wisconsin’s 72 counties and the 34 cities with populations greater than 25,000 residents. St. Croix County’s April rate was estimated at 3.8%, which is lower than the final rate of 4.5% for March and February’s final rate of 5.0%. One year ago, the county’s unemployment rate was estimated at 18.0%.

DWD said preliminary unemployment rates from March to April declined in 71 of 72 counties and declined in all 72 counties year-over-year. The rates ranged from 2.7% in Lafayette to 9.3% in Menominee.

St. Croix, Pierce, Polk, and Dunn counties comprise Wisconsin’s Greater St. Croix Valley. In addition to St. Croix’s rate of 3.8%, April’s preliminary rate in Pierce and Dunn is at 3.9%, while Polk came in at 4.9%.

The preliminary (seasonally adjusted) unemployment rate for Wisconsin in April was estimated at 3.9%, which is higher than the final rate of 3.8% for both March and February. One year ago, the state’s seasonally adjusted rate was 14.8%. 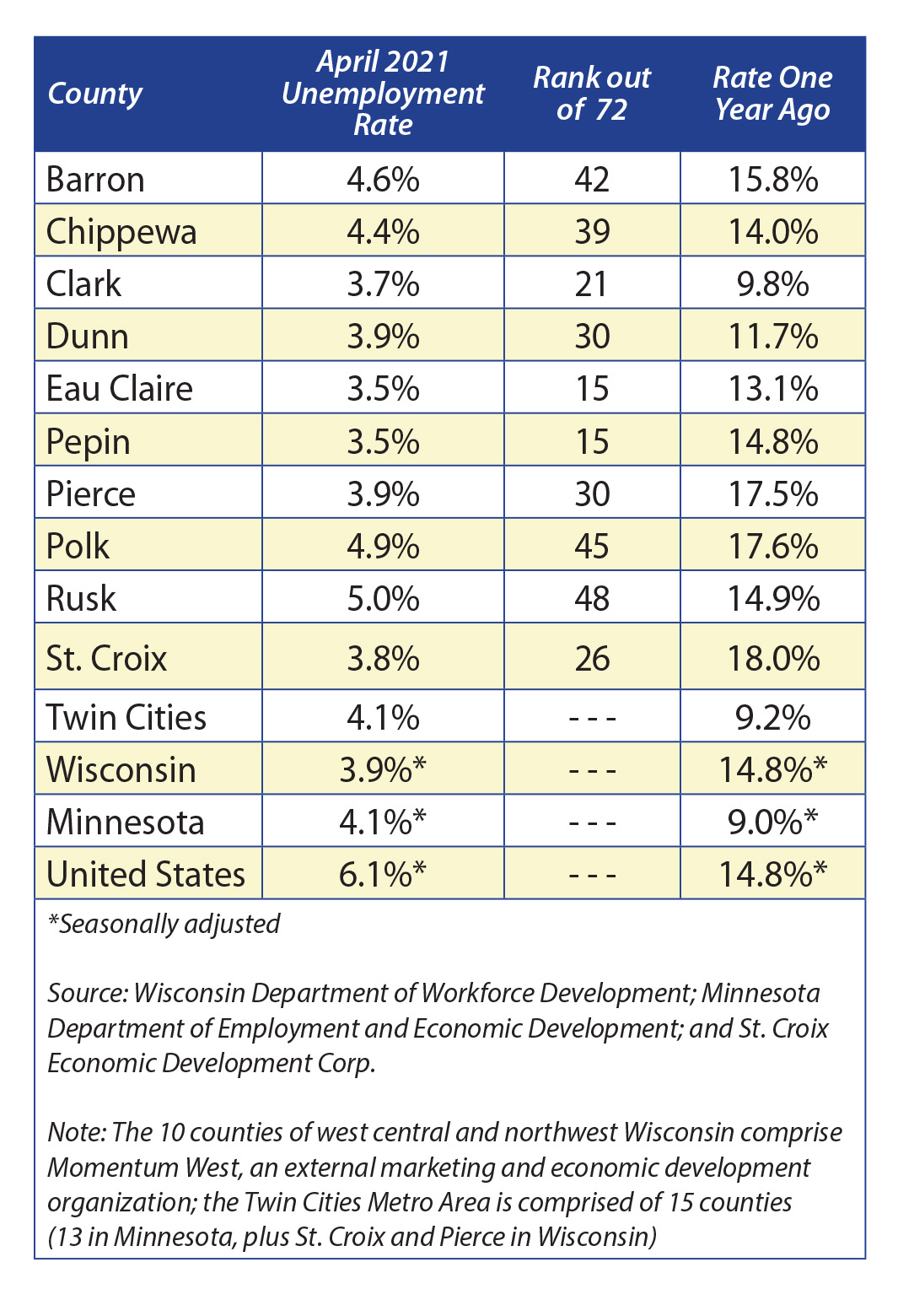 Every St. Croix Valley resident possessing a high Dairy IQ knows June is Dairy Month – not just in Wisconsin but nationally. Wisconsin’s dairy industry contributes an estimated $45.6 billion to the state’s economy each year. That’s more than the combined value of Florida citrus and Idaho potatoes. Dairies maintain 154,000 jobs and generate $1.26 billion in state and local taxes, all according to the Dairy Farms of Wisconsin.

Legislative action in 1971 designated the dairy cow as Wisconsin’s official domesticated animal to reflect the importance of the state’s dairy industry. Governor Patrick Lucey issued an Executive Order in 1972 to recognize the Holstein-Friesian breed as the official dairy cow until May 31, 1973. Thereafter, on June 1st of each year, the Wisconsin Secretary of Agriculture designates a different breed from the state’s purebred dairy stock as the presiding dairy cow for the year.

In the state that brought consumers Pabst, Schlitz, Leinenkugel’s, and New Glarus, an ice cold glass of milk is Wisconsin’s official beverage. While beer is important, milk has nine essential nutrients, including calcium, vitamins A, B-12, and D, phosphorus, protein, riboflavin, niacin, and the all-important pantothenic acid, which plays a role in the body’s energy cycles, converting carbohydrates, protein, and fats to fuel.

Enough about milk, what about a frozen delight like ice cream? The U.S. Department of Agriculture (USDA) estimates the average American consumed 22 pounds of ice cream and other frozen dairy products in 2019, the highest level over a 10-year rolling comparison. A global pandemic like COVID-19 will likely bump the 2020-2021 graphs to new heights.

Ice cream is not an American discovery. The Chinese, reportedly under the Tang Dynasty at around 697 AD, used salt and ice to freeze dairy products. Others credit Naples, Italy as the birthplace of the first real ice cream. Quaker colonists brought ice cream recipes to the U.S. and opened the first retail shops in New York and elsewhere.

It takes 12 pounds or 1.5 gallons of whole milk to make one gallon of ice cream. In a fact from the frozen dairy products police, an estimated 85 percent of home freezers in the U.S. have some kind of ice cream in it. Americans rank vanilla as their favorite flavor, followed by chocolate, cookies and cream, mint chocolate chip, and chocolate chip cookie dough.

As for Wisconsin ice cream facts, the first ice cream sundae was served in Two Rivers back in 1881 when a customer at Edward C. Berner’s soda fountain asked to top off his ice cream with the chocolate sauce used for sodas. And yes, it caught on and was originally offered only on Sundays.

I scream, you scream! Whether it’s a dish or cone or right out of the container using a spoon, Americans and St. Croix Valley residents love dairy products and especially ice cream. Here’s to June and July!

Governor Tony Evers announced that applications for up to $420 million in new Wisconsin Tomorrow Small Business Recovery Grants for small businesses affected by the COVID-19 pandemic will open at 8 a.m. Monday, May 24 through 4:30 p.m. Monday, June 7, 2021.

The Wisconsin Tomorrow Small Business Recovery Grants program is a collaboration between the Wisconsin Economic Development Corporation (WEDC) and the Department of Revenue (DOR). The effort, funded by the American Rescue Plan Act of 2021 (ARPA).

The new grants will target Wisconsin small businesses, including those that started in 2020, in sectors that have been hit hardest by the pandemic. Individuals and businesses interested in learning more about the Wisconsin Tomorrow Small Business Recovery Grant program by visiting the main page of the Department of Revenue, revenue.wi.gov.

St. Croix Economic Development Corporation (EDC) held its Annual Meeting remotely on Tuesday, May 11th.  A slate of officers for 2021-2022 and one new board member were elected, along with the re-election of three directors.

Angela Popenhagen, the principal of Stevens Engineers (greater Hudson, WI), was elected Board President. She has served on the board since 2017 and replaces Rob Kreibich who completed his term as President. Kreibich will continue to serve on the board and the executive committee as Past President.

Cameron Kelly, was re-elected Corporate Secretary-Treasurer. He is an attorney with Lommen Abdo, P.A. (Hudson office).

April Nelson, Tom Borowski, and Rob Kreibich were re-elected to the board. Nelson is a Vice President and Loan Officer with WBD; Borowski is President of Hudson Hospital & Clinic; and Kreibich is the Executive Director of the New Richmond Area Chamber of Commerce and Tourism Bureau.

Scott Morrissette of River Falls was elected to a three-year term on the board. He is a Vice President, Business Banking, with Bremer Bank and serves on the River Falls City Council.

The board of directors accepted the 2020 financial review from Guinn, Vinopal & Zahradka, LLP.

At the conclusion of the Annual Meeting, a plaque was presented to Rob Kreibich for his service as President and departing director Rob O’Keefe received a memento for completing his final term on the board.

Tourism is one of Wisconsin’s top three industries along with manufacturing and agriculture. Throughout 2020, grant funds through Wisconsin’s share of the CARES Act were distributed to tourist-reliant businesses. A rebound is expected in 2021 as the economy re-opens.

Slow marches across elevated stages will soon play out at high schools in the St. Croix Valley. Graduation for the Class of 2021 has arrived. Finally. For some, the formality of receiving a diploma may seem like an eternity in the making. It may have started out for four and five year olds in 2007-08 as pre-kindergarten programing or official kindergarten at age five-six before entering first grade in 2009. Twelve years later, Hello World!

The reality? Those twelve years of elementary, middle, and high school could be viewed as the first act of a three act play. Those acts are sometimes referred to as the set-up, confrontation, and resolution. Class of 2021, you’ve just advanced past the introduction of the main characters, including the protagonist, antagonist, and the conflict in need of resolution. Will the young man meet the young lady? Will the hero score the winning goal? And will the mystery be solved? The answers in no particular order are: Yes, Yes, and Maybe.

Class of 2021, plan on participating in act two, spread over the next four to ten years, to learn more. There’s the college or university experience. This includes technical colleges. The military could be calling some. Want to see the world? Uncle Sam may have an offer for you. For others, act two could mean a gap year (or two) as a way to mature, or entry level opportunities in business and industry. Professors, work supervisors, and family generally expect the same thing – exceptional attendance and even better participation. Act two is not a one way street.

Class of 2021, act three is out there on the horizon and will be upon you before you know it. Family obligations. Work obligations. Community obligations. Financial obligations. All will demand time and attention. Remember the seemingly meaningless advice offered by a den or pack leader, volunteer coach, or parent? Ahhh, you’ll soon be finding yourself doling out the same advice.
Class of 2021, you are survivors of sorts. Of a global pandemic. Of masking up. Of back-to-back years of remote learning. Of growing up a little too fast. Of relying on electronic devices for zooming around the galaxy, for support and comfort, oh, and for communicating. Think of the innovations that are ahead. The Class of 2021 is living what was previously found in comic books and cartoons, namely Dick Tracy, Batman, and the Jetsons.

Class of 2021, you’ve completed your graduation requirements and commencement ceremonies call. Please remember this – commencement is a beginning, not an ending.

As for advice, Ferris Bueller, the lead character in the 1986 movie classic, Ferris Bueller’s Day Off, put it in perspective by saying, “Life moves pretty fast. If you don’t stop and look around, you could miss it.”

While you are living life, don’t miss out on life.