October is Manufacturing Month, and increasingly across Wisconsin’s St. Croix Valley and Planet Earth, science and technology are the game changers.

Ask the local micro-molder. Its smallest molded part was 0.00004 grams and 1,025 units were produced from a single plastic pellet. P.S. 0.00004 grams is teeny-tiny. Their medical and pharmaceutical customers require products as small as salt grains, or smaller.

Ask the local serial entrepreneur whose specialty is material science, resulting in the patented discoveries of disruptive and transformative technology platforms. In his words, customers demand products as light as air, as strong as steel, and . . . as cheap as dirt.

Ask the local craft brewer who pushes the creativity envelope to produce blueberry pancake blonde ale, or French toast ale, or key lime pie beer. This is not your father’s Falstaff and taproom consumers cannot be fooled.

Ask the local start-up donut maker who operates out of a mobile food truck and offers the likes of Butterfinger Bomb, Orange Dream, and Captain Crunch donuts. Success is measured by the length of the food truck lines.

The examples go on and on. Realizing it or not, the micro-molder, material scientist, brewer, and donut maker are kindred spirits. They’re bound by the fact that they produce something. Yes, they’re all considered manufacturers in one form or another.

Why the fuss about manufacturing and a month-long celebration? Manufacturing helps make the world go around, it seems. It is exacting work, sometimes referred to as advanced manufacturing. This means closer tolerances, tighter formulations, and precise outputs.

Manufacturing in Wisconsin makes a huge impact, to wit:

It is the largest contributor to the state’s economy;

It produces $63+ billion in total output, or 19 percent of the state’s gross domestic product (GDP);

It employs one in five workers or around 483,000+ associates across the state; and

Eighty-six percent of the state’s exports are manufactured goods.

Resources to support manufacturers are plentiful, starting with local school districts. Most introduced STEM or STEAM into the curriculum years ago. A tomato apiece, STEM or STEAM stands for science, technology, engineering, and math. An “A” was added to reflect the growing importance of art. Technical colleges and universities output graduates who are eager to learn and earn. Small business development centers (SBDCs) help counsel companies on topics like incorporating, marketing, and financial literacy. Chambers, EDCs, and state-federal agencies lend support, and some have financial resources and incentive programs. Together, the stage is assembled for manufacturing to grow and thrive.

Happy Manufacturing Month 2021. Here’s to the kindred spirits brought together by the definition of manufacturing. Here’s to exceptional careers in advanced manufacturing in the St. Croix Valley. Here’s to an outlandish beer or a devilish donut, consumed separately but produced by innovative manufacturers. 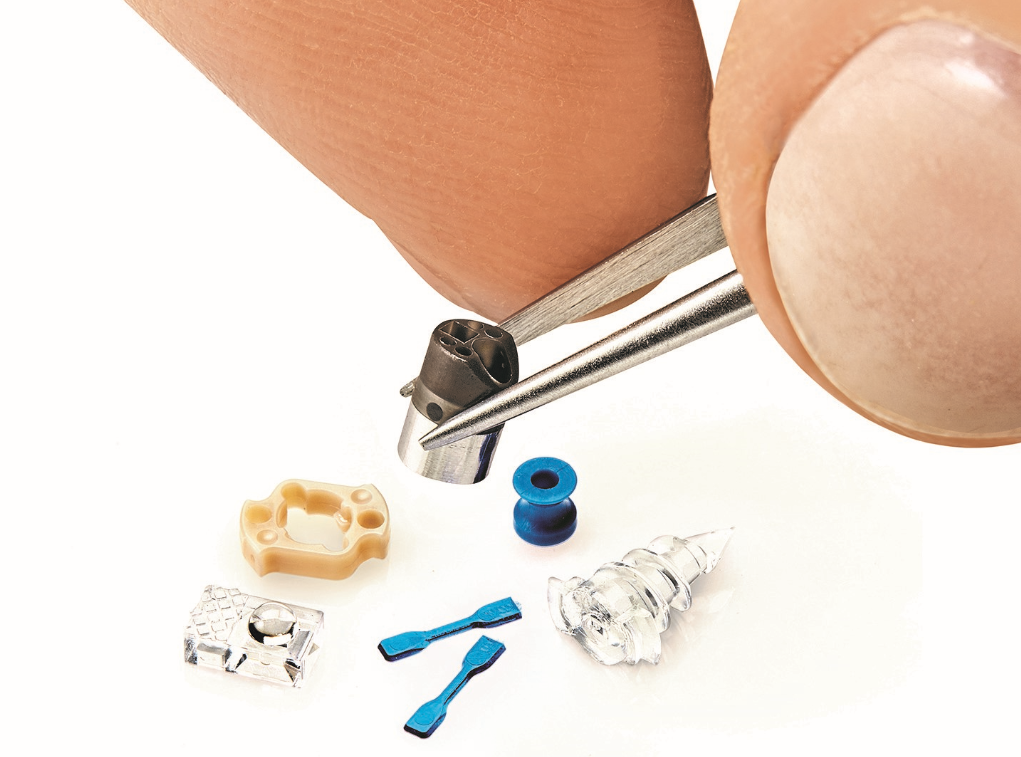 On September 22nd, the Wisconsin Department of Workforce Development (DWD) announced the preliminary August 2021 unemployment rates for Wisconsin’s 72 counties and the 34 cities with populations greater than 25,000 residents. St. Croix County’s August rate was estimated at 3.3%, which is the same as July’s final rate but lower than June’s final rate of 3.8%. One year ago, the county’s unemployment rate was estimated at 6.1%.

Preliminary unemployment rates declined from July to August in 27 of Wisconsin’s 34 largest cities and declined or stayed the same in all of the largest cities year-over-year. Rates ranged from 3.1% in Madison to 7.3% in Milwaukee.

The preliminary (seasonally adjusted) unemployment rate for Wisconsin in August was estimated at 3.9%, matching the final rates for both July and June. One year ago, the state’s seasonally adjusted rate was 6.1%.

The preliminary (seasonally adjusted) unemployment rate in Minnesota in August was estimated at 3.8%, which is lower than July’s final rate of 3.9% and June’s final rate of 4.0%. Minnesota’s seasonally-adjusted rate one year ago was 6.6%.

August’s estimates are preliminary and are subject to revision within the next few weeks. 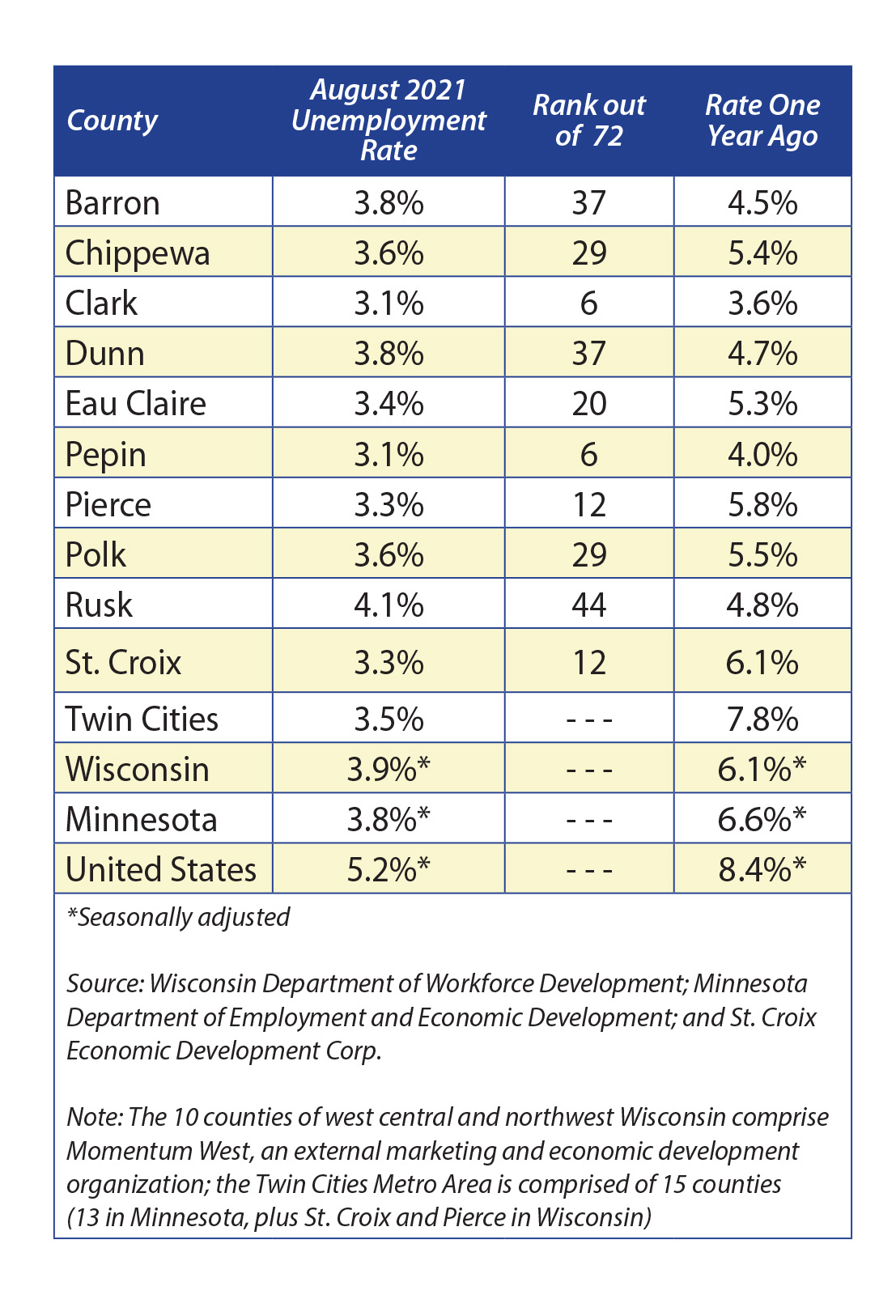 As the season winds down, we are reminded baseball, life, and the world stage are sometimes intertwined.

The St. Croix Valley and U.S. of A. are far different places today than on September 10, 2001, the day before hijacked planes hit and destroyed the World Trade Center, severely damaged the Pentagon, and augered into a hemlock grove in rural Shanksville, Pennsylvania.

The Shanksville site became a national memorial, and an inscription etched in glass at an observation deck reads, “A common field one day. A field of honor forever.” It served as the memorial’s mission statement during early planning stages and came from Stephan Ruda, a member of the Los Angeles Fire Department. Shortly after the attacks, Ruda wrote the message on his handmade quilt and sent it the Shanksville scene.

What about another common field? Baseball. Played on a field. America’s pastime. Following the terrorist attacks, Major League Baseball immediately canceled its games on September 11th, a Tuesday, and later, canceled all games for the rest of the week. They resumed on the following Monday and still played out a full, 162 game schedule.

New York is the world’s greatest city and has its Mets and Yankees. Both are bound by post-9/11 stories. On September 21st, the Mets were at home for the first time since 9/11 and played the Atlanta Braves, a big rival. Before the first pitch, players and coaches from both teams met on the field and hugged one another. Liza Minnelli brought the stadium down with a five-plus minute version of New York, New York during the seventh inning stretch. Trailing 2-1 in the bottom of the 8th inning, the Mets Mike Piazza hit a two-run homer for a lead they’d keep. The crowd of over 41,000, including almost 10,000 walk-ups who bought tickets at the gate, burst into cheers of USA! USA! NYC finally had something to feel good about. Did Hollywood write the script?

Meanwhile, the Yankees won the east division and played the Oakland A’s, baseball’s wild card playoff team. They lost the first two home games. Prior to the start of game two, President George W. Bush told a somber nation that U.S. military forces had attacked the Taliban in a far-away place called Afghanistan.

The Yankees earned a spot in the World Series against the Arizona Diamondbacks. The D-Backs were winners of the first two games in Arizona, and the Yanks looked forward to a New York crowd. President Bush resisted suggestions to throw out a ceremonial first pitch in Arizona. He’d do it in New York in game three. Security was tight. An armed secret service agent wore an umpire’s uniform to be on the field. President Bush took his throwing obligations seriously and warmed up in the bowels of the stadium. Derek Jeter, the Yankees’ captain, offered him advice. “Better throw it from the mound and not in front of it.” And more famously, “Don’t bounce it, they’ll boo ya.” Well, the President, sporting a bullet-proof vest under his jacket, delivered a strike from the mound. The crowd erupted. USA! USA! An outfield sign put it in perspective, U.S.A. Fears Nobody – Play Ball.

Alas, the Yankees lost the Series to the D-Backs. But in the fall of 2001, New Yorkers showed the world they could pull themselves together and resume normal life which included baseball, on a common field.

St. Croix Valley residents are high achievers. When given a task, they’ll throw from the mound, and won’t bounce it, either.

With high school and college football season well underway, there’s no evidence that Daniel Ruettiger ever played a snap in the St. Croix Valley. But thanks to cable TV and the Internet, Ruettiger’s personal drive and passion lives on in a 1993 movie bearing his nickname, Rudy. The feel good movie is likely a must-watch on the eve of any rivalry game.

Ruettiger, of Joliet, Illinois, dreamed of playing college football for mighty Notre Dame in the 1970s but poor grades a small physical frame were barriers. He stood five feet, six inches tall and weighed 165 pounds. That did not stop Rudy. Barriers were overcome by his willingness to make an extra effort. He spent a couple years at Holy Cross College in Indiana, and after multiple rejections, Notre Dame finally granted him acceptance.

There was no athletic scholarship for Rudy, much less academic aid. Hard work in the classroom and a knack for making plays in football practice got Ruettiger a spot on Notre Dame’s scout team. Thirty-five players on football scholarships were ahead of Rudy’s chances of ever suiting up on game day.

The season wore on and Rudy’s hope of playing on game day was rapidly coming to an end. Comfortably ahead, Head Coach Dan Devine finally sent him in with the kick-off team and he remained on the field with the defense in the game’s final plays. Rudy sacked the quarterback as time expired and was carried off the field by teammates celebrating a victory

End of story? Not yet. The son of a steel mill worker, Daniel Ruettiger overcame poor grades caused by dyslexia and obtained his degree from Notre Dame. That’s mighty Notre Dame, the academic powerhouse. Five younger brothers also received college degrees. Later, he ran afoul with the Securities and Exchange Commission and paid a substantial fee as part of his settlement. That personal setback did not deter Rudy. Occasionally he does motivational speaking and is an author.

In every huddle, on every practice field, in every drumline, in every danceline, in every classroom, in every neighborhood, there’s a Rudy. Who will be this season’s Rudy in the St. Croix Valley? Show up and witness it. Or, overcome those barriers and be your own Rudy.

The quote, “It’s not whether you get knocked down, it’s whether you get up” is attributable to Vince Lombardi, who overcame his own share of obstacles. It puts stories like Rudy’s in perspective.

Here’s to a Rudy who doesn’t know he or she is a Rudy or Ruby. Make it happen. Rudy! Rudy! Rudy!