Nominations Open for 2022 Business of the Year

Nominations Open for 2022 Business of the Year

St. Croix EDC is accepting nominations for its 2022 Business of the Year awards program.

Qualifying companies must be involved in manufacturing, distribution, construction, health care, or must be a service provider to other companies. Companies must be operated for profit. Retail companies are not eligible.

Individuals may nominate a company in any of the categories or a business may place their company’s name in nomination.

Contributions to Enhance the Community:
Contributions to community projects, service to area youth, education programs, and other efforts to increase the quality of life in the area.

The honorees will be announced in January and recognized at an event mid February. The exact date and location are yet to be determined.

A nomination form and guidelines can be obtained by clicking here or by contacting Nita Dusek at nita@stcroixedc.com or calling by (715) 690-2110. The deadline to submit is Friday, December 16, 2022 at the close of business.

← THX VETS Says it All September Unemployment Rate is 2.9% →

THX VETS Says it All

THX VETS Says it All

The state of Wisconsin first required motor vehicle registrations that included displaying license plates way back in 1905, according to Wikipedia, the all-knowing online encyclopedia. Today, vehicle registrations and plates are handled by the Wisconsin Department of Transportation, Division of Motor Vehicles. Plates measure 12 inches by 6 inches, are made of aluminum, and going back to June 2000, the format is three random letters and four random numbers, along the lines of ABC 1234.

Riveted numbers were replaced by the first series of embossed numbers in 1914. In 1940, “America’s Dairyland” slogan was introduced, and in 1986, new graphics included a sailboat and sunset, flying geese, and a farm scene. The slogan and graphics still exist.

Like other states, vanity or personalized plates are available in Wisconsin, subject to certain standards. WisDOT may refuse to issue, or may recall after issuance, a request that may be offensive to good taste or decency, misleading or conflicts with any other license plate. They come with a price. A $15 personalized plate fee is required each year in addition to the regular annual registration fee. Motorcycles and farm trucks, which are renewed biennially, cost an additional $15 for each year of registration.

WisDOT offers a search site to find out if personalized license plates are available at https://trust.dot.state.wi.us/ppup/searchPlate.do. Bad news. Both BIGFAN and XCUZME are not available. Good news. LUVAR12 (Aaron Rodgers #12), GO-CHZ, CHZ-EATR, and FISHFRY are available.

A vehicle was recently spotted in Wisconsin’s St. Croix Valley. Its plates read, THX VETS. Seven letters say it all. As Veterans Day nears, THX VETS is particularly meaningful. Veterans Day is a federal holiday observed on November 11th each year to honor military vets. It coincides with other holidays around the globe marking the end of major fighting in World War One. THX VETS.

“Don’t forget: hire a vet” was a public service announcement from 1965 to 1980. The message is now Hire Heroes. Employment assistance is the Number One requested service from military members transitioning to civilian life. Hire Heroes USA is an example of a nonprofit veteran employment service organization. It provides assistance to thousands of veterans and spouses each year. Wisconsin counties have a fully-staffed Veteran Service Office (VSO) which can help determine if a veteran or a veteran’s family may qualify for local, state, and federal benefits. VSO staff may be a friendly voice or face veterans are looking for. It could start with coffee and a conversation.

Employers large and small continue to look for hard-working associates to hire. Veterans served our country. They can serve business and industry, too. Veterans make great employees. Hire Heroes.

Look for the vehicle with special plates in the St. Croix Valley. Today, tomorrow, and especially on November 11th, THX VETS, 3X. 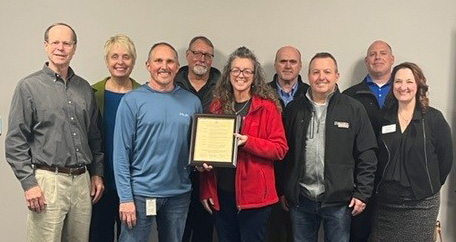 Photo: (front, l to r) Roy Gruel and Crystal Schuldt of SMC Ltd. pose with representatives of St. Croix EDC and the Village of Somerset as part of the National Manufacturing Month on Friday, October 14, 2022

Representatives from St. Croix EDC and the Village of Somerset recognized SMC Ltd. as part of National Manufacturing Month on Friday, October 14, 2022.

Manufacturing in Wisconsin
Manufacturing is Wisconsin’s top industry sector, producing $65+ billion in total output, or almost 20 percent of the state’s gross domestic product (GDP). Wisconsin’s manufacturing sector boasts around 8,000+ incorporated businesses and employs one in six workers or around 475,000+ associates across the state. 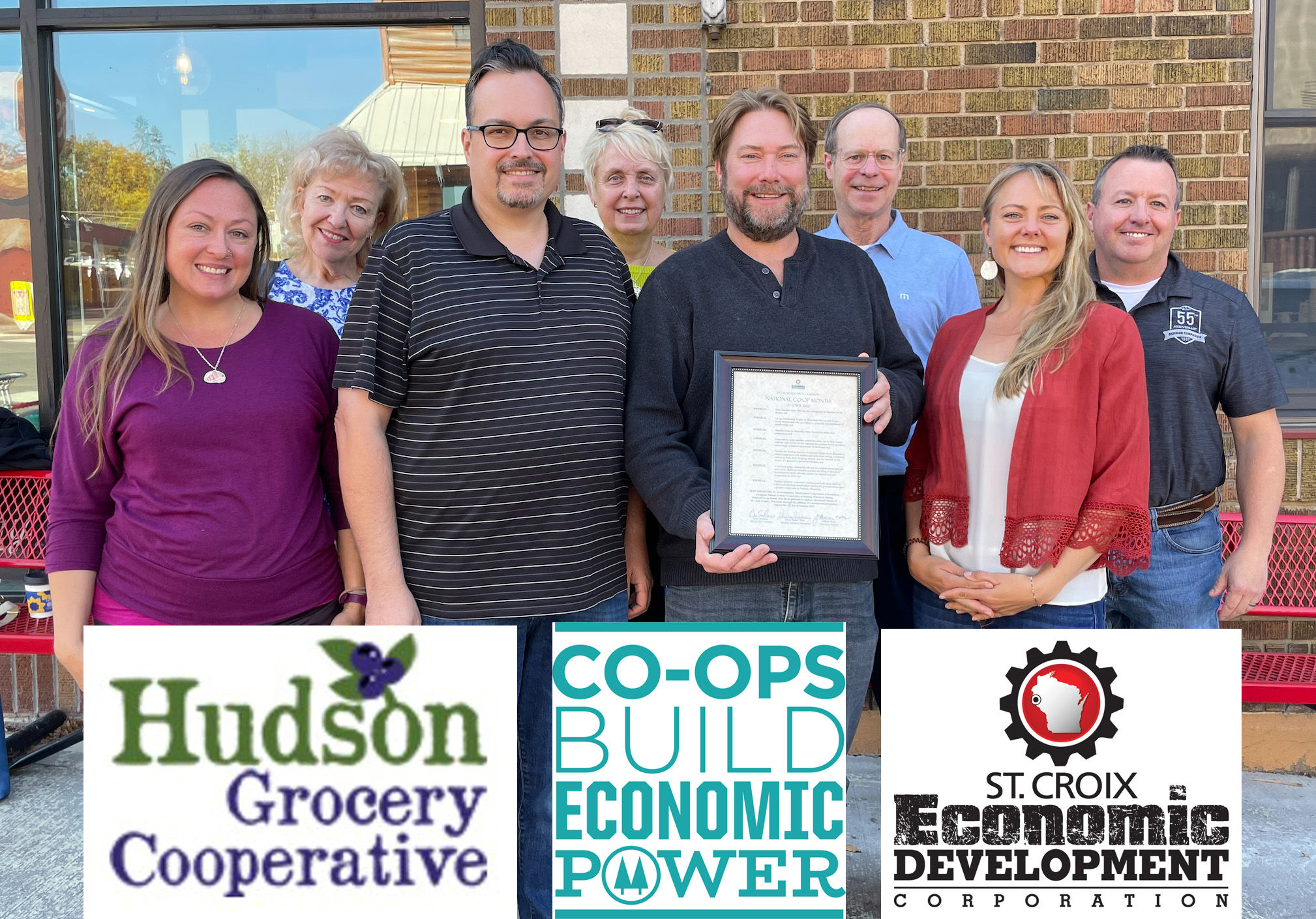 Photo: Board members from the Hudson Grocery Cooperative posed with representatives of St. Croix EDC as part of the EDC’s recognition of National Co-op Month on Tuesday, October 11, 2022

Just like Halloween displays popping up in big box retail stores in mid-August, pumpkins in all shapes and sizes are finally available, just ahead of October 31st’s scary day. But before there’s a Halloween celebration, pumpkins are deserving of their own day. Yes indeed, Wednesday, October 26th is National Pumpkin Day. Good Gourd Almighty! Circle it on the calendar.

What about the lowly pumpkin? Friend or foe? Do they bring an economic impact? The details are here:

-Reportedly, eating pumpkins is good for your health: Pumpkins are high in potassium, which has a positive impact on blood pressure. This news pleased the St. Croix Valley’s fast talking economic development guy. Anything for lower BP, he vowed, anything. Pumpkins are full of fiber, what a relief, as well as vitamin C to help reduce the risk of stroke, loss of muscle mass, and reduction of kidney stones.

-Pumpkins taste good (reportedly): Baked, boiled, steamed, or fried, there are many ways to prepare and enjoy pumpkins.

-Fruit or Vegetable: Because of the seeds, pumpkins are considered a fruit, and the average pumpkin has a one cup of them. Pumpkins are 90 percent water.

-History: The oldest evidence of pumpkin seeds goes back to between 7000-5500 B.C. to seeds found in Mexico.

-Pumpkins are grown all over the world and are found in six of the seven continents. You won’t find them in Antarctica, however.

-According to the U.S. Department of Agriculture, all states in the U.S. produce pumpkins, but six states produce most of them. Illinois leads the way. An estimated 40 percent of so-called pumpkin acres are usually harvested in the Top Six pumpkin producing states.

-Illinois is on a roll. In 2020, growers in the Land o’ Lincoln increased their acreage and harvested more than twice as many pumpkin acres as any other state. Almost 80 percent of the acres in Illinois produce pumpkins for pie-filling or other processing uses (read: pumpkin puree).

-The National Retail Federation, the source for all things involving spending, estimates almost 150 million Americans plan on buying pumpkins to make jack-o-lanterns. Inflation has impacted the price of pumpkins, going from $4.83 in 2021 to $5.40 in 2022. Embrace your inner nerd. It’s only 57 cents, but equates to nearly 12 percent.

-Pumpkins can fly if they’re launched. Bridgeville, Delaware hosts the World Championship Pumpkin Chunkin’ contest every year in early November. High-tech and low-tech contraptions fire pumpkins into an open 200-acre field. Their world record is 4,694.68 feet. Can the holy grail of one mile or 5,280 feet be far off?

-As recent as October 10, 2022 a grower from Minnesota set a new U.S. record for heaviest pumpkin at a contest in northern California. It weighed 2,560 pounds and beat the previous record by 6 pounds, set just 10 days earlier by an upstate New York grower. The world record is 2,702 pounds from a grower in Italy.

-Get rich scheme for kids: A jack-o-lantern is a way to add value to a pumpkin. Keep looking for neighborhood signs from kids hoping to make a few bucks by carving jack-o-lanterns to consumer specifications. 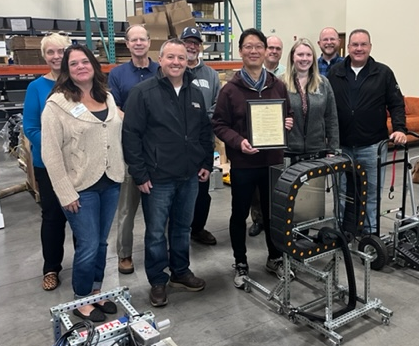 Photo: Jerry Yu (center of photo) is the chief executive officer of SDMC America Technology Inc. and he posed with representatives of St. Croix EDC and the City of River Falls as part of National Manufacturing Day on Friday, October 7, 2022

About Manufacturing Month and Day

About Manufacturing in Wisconsin

Manufacturing is Wisconsin’s top industry sector, producing $65+ billion in total output, or almost 20 percent of the state’s gross domestic product (GDP). Wisconsin’s manufacturing sector boasts around 8,000+ incorporated businesses and employs one in six workers or around 475,000+ associates across the state.