About the Winners:
Gallery 77 is owned by Pablo and Suzanne Sotelo. The company opened in Hudson 18-months ago, but brings over 17 years of experience creating stone and tile designs for all areas of the home, including the kitchen, bath, entry, fireplace and outdoor kitchen and BBQ areas. The operations include a showroom, warehouse, and adjacent production facility where material is cut to very exacting measurements, thanks to a significant investment in state-of-the-art equipment. Before launching the business, Pablo and Suzanne found an important regional resource – – the Small Business Development at UW-River Falls – – and utilized the SBDC’s No Cost Business Consulting to define goals and a vision. They also enrolled in the SBDC’s
10-week Entrepreneurial Training Program where a business plan was developed to strategically guide them forward.

TurnKey Corrections and Three Square Market are partner companies, owned by brothers Tim and Todd Westby. TurnKey works with correctional facilities on kiosk vending needs and Three Square Market is a corporate solution to in-company breakrooms and convenience stores (snack and vending), and a new innovation – autonomous stores – in white spaces outside the traditional corporate breakroom. Both companies are growing at rapid rates and their respective footprints are global. Combined with its TurnKey jail technology business, Three Square Market has over 10,000 kiosks across U.S., Canada, Europe, Asia, Central America and Australia.

Mark Tyler and a business partner launched OEM Fabricators in Woodville as a heavy weldment and steel fabricator business. The company has grown to include multiple locations and a worldwide customer base. A recent retirement from OEM enables Tyler to devote time to his latest passion, workforce development and early childhood development. Tyler served on the board of the Wisconsin Technical College System, which led to a board seat with the UW Regents. He is also extensively involved with legislative advocacy at the state and national level, highlighting the important need for workforce and early childhood development. Tyler’s work resulted in governance roles with the Wisconsin Manufacturers and Commerce, and he has volunteered with many organizations such as Wisconsin Department of Public Instruction, The Governor’s Early Childhood Advisory Council, the Family Resource Center St Croix Valley, and the Governor’s Council on Workforce Investment. Tyler is a tireless advocate for St. Croix County and the St. Croix Valley.

Each of the winners received a plaque from the EDC as well as a Legislative Citation from the State Senate and Assembly in Madison, and congratulatory letters from Missy Hughes, Chief Executive Office, Wisconsin Economic Development Corporation (WEDC); U.S. Senators Ron Johnson and Tammy Baldwin; St. Croix County; Village of Woodville; City of Hudson; and City of River Falls.

Past business of the year winners and recipients of the EDC Directors Award were introduced during the program.

An estimated 175 people attended the awards dinner and helped celebrate the accomplishments of the honorees. 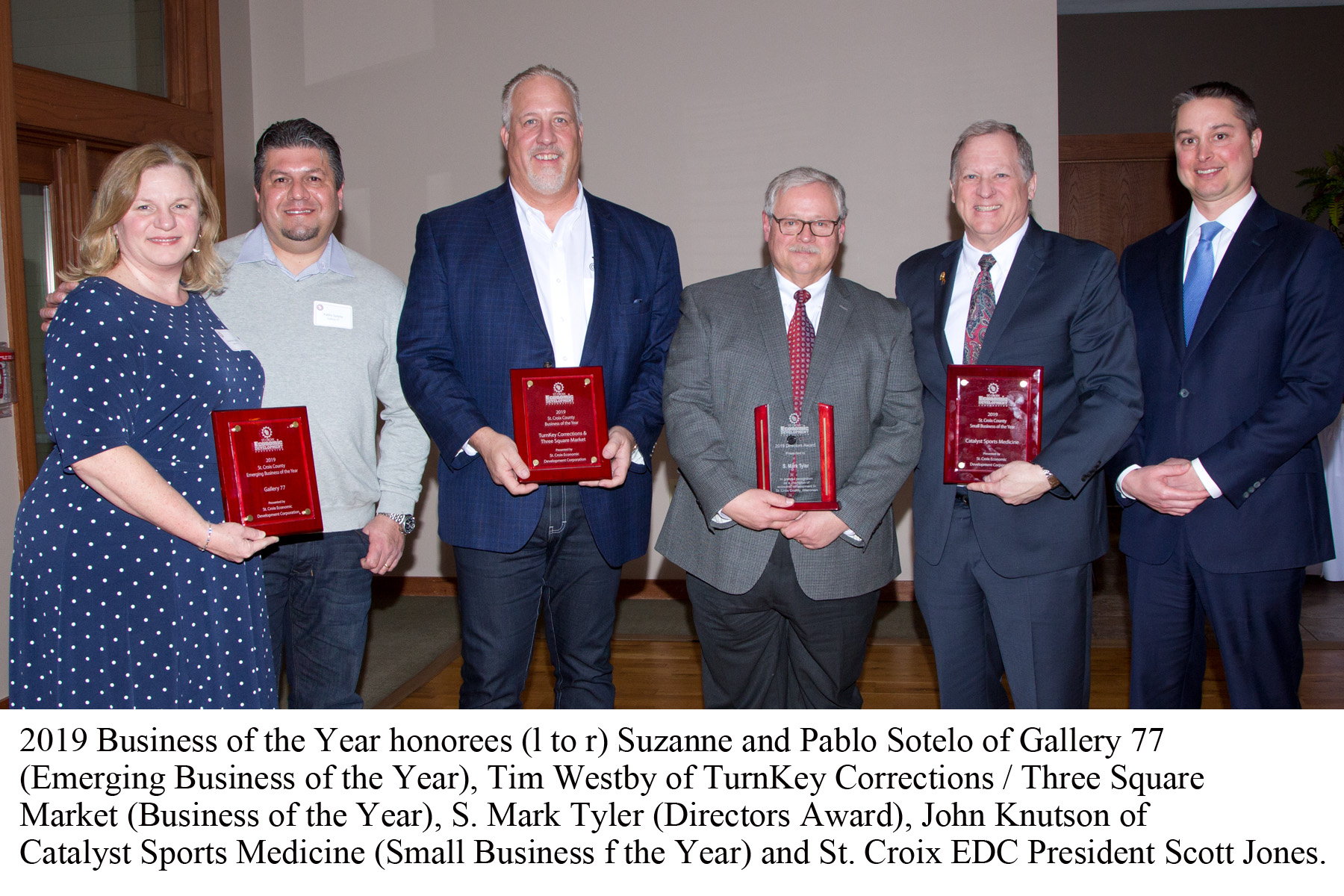