St. Croix Economic Development Corporation (EDC) held its annual meeting on Tuesday, May 8, 2018. Jill Gorres (left), Benefits Consultant, JA Counter (New Richmond, WI), was elected to a one-year term as Board President. She has served on the board since 2013 and replaces Rob O’Keefe who completed his term as President. O’Keefe remains on the Board and will continue to serve on the executive committee in his new role as Past President. 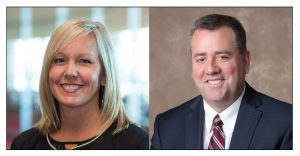 April Nelson (l) and Tom Borowski (r) were elected to initial 3-year terms on the board. Nelson is a Vice President and Loan Officer with WBD and Borowski is the President of Hudson Hospital & Clinic (Hudson). Both companies are longtime members-supporters of St. Croix EDC.

The board of directors accepted the 2017 financial review from Guinn, Vinopal & Zahradka, LLP.

At the conclusion of the meeting, a plaque was presented to Rob O’Keefe for his service as President. Chuck Jerrick and Steve Peterson also received mementoes for completing their terms on the board.